January 27, 2012
Yes, I was steadfast about not showing pictures of the mockup, but that's because it was made out of blue jeans and without quite the attention to detail that it should have had.  But the real version is much more presentable and won't embarrass me.

Both halves, on the floor: 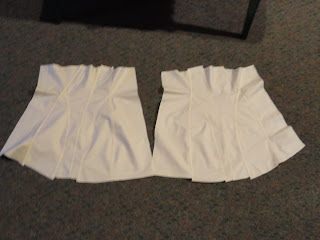 The fabric I'm using for the corset is down-proof ticking.  According to the website, it's a coutil substitute.  Never having used coutil, I can't say how much it's like that - but it's tightly woven and very light, and I think the finished corset will be strong enough. 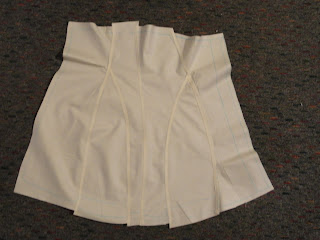 You can see blue lines all over the lower edge.  Somehow, I did a terrible job adjusting the pieces for length, and I recognized this when I was tracing and managed to do a decent job at fixing it along the way.  I think I might just take the pattern of these on graph paper for a record, rather than taping more bits of newspaper to the bottom of the pattern pieces - probably more likely to be accurate.

A very important thing I learned, then forgot, then remembered: with this sort of corset you have to sew the pieces in the right order.  From left to right, above, you have to sew the second piece to the third and 4 to 5, so that the gores/gussets and the pieces they're sewn to form a smooth line to be sewn to the first and sixth pieces.  Unfortunately, when I remembered I had already trimmed the seam allowance on one side for felling and couldn't fix that, but I did take out the seam on the other side.

The one corner I was thus forced to fell: 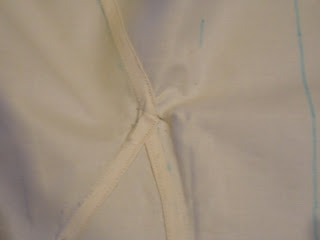 Fortunately, the tops of all the other gussets came out smoothly: 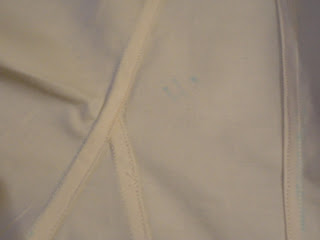 This is definitely a style that requires writing numbers on the pieces.  To be on the safe side, I didn't double the fabric, but instead traced around a pattern piece, wrote "[number]A" on them, put some dots in to mark the seam allowance roughly, and then flipped them over and traced them again (with "B") so that they would all have the seamline drawn on.  This was probably a very good decision.
1910s 1911 corset sew-along 20th century corsetry photos