Isabelle's gown appears to close without a stomacher, though it doesn't close all the way.  Her kerchief is tucked inside the opening, under the lacing.  The gown itself seems to be very plain, with no trim. 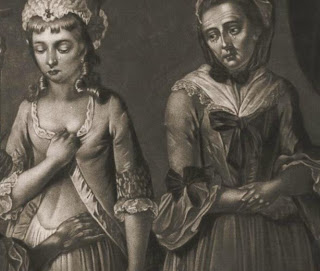 The young woman is dressed in a polonaise, trimmed along the cutaway front with a satin band, and on the sleeves with heavily ruched cuffs.  The older woman is wearing the older style, with bows on the stomacher and sleeves, and self-fabric ruffles.   The subtext is that the young woman has ideas above her station and is dressing in accordance with them (and has probably lost her virtue), while the older woman's clothing is what someone of their class ought to be wearing in order to be respectable. 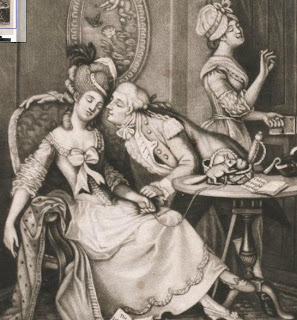 The sleeping fashionable woman is wearing a gown with a bodice that definitively meets at the center front, with gathered trim along the neckline, the closure, and the front of the skirts.  She has ruched cuffs, but, oddly, they are ruched horizontally rather than vertically.  The maid has more normally-ruched cuffs, and the stripes on her sleeves are horizontal. 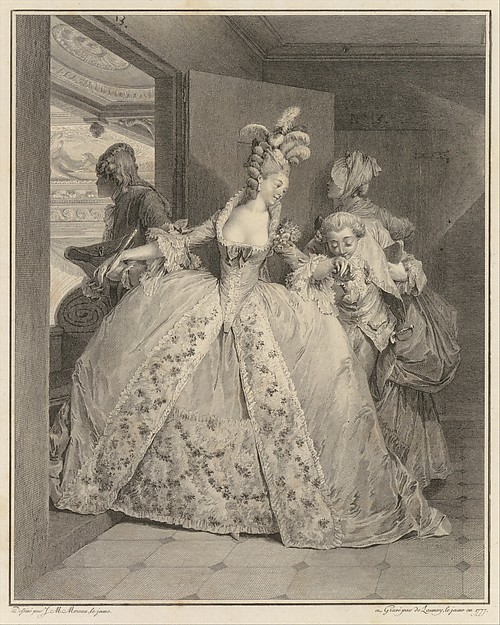 Like the fashionable woman in the previous image, this lady has a center-front closing bodice with a gathered trim.  Her gown (which might be a sacque) is more formal, however, with large hoops and a flat, embroidered trim down the fronts of the skirts and across the bottom of the petticoat.  Her sleeves have flounces and bows on them, and there is a bow at the center of the neckline (as in the previous image).  She also has a standing frill around her neckline.  The woman in the background, probably a maid, is wearing a gown that is pulled up through the pockets.

(1777 is also when the caricatures of cork rumps begin.) 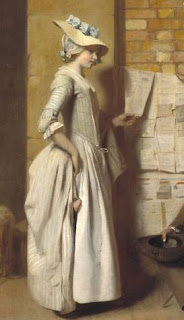 The young girl's sleeve terminates in a shaped cuff that fits over her elbow.  Her bodice seems to have robings, and therefore does not close center front; her skirts may be slightly rétroussée in the back.  Her apron is long and opaque.

The circassienne shown in this fashion plate has an unusual closed front, which is bordered with a gathered trim, as is the neckline. The gown and petticoat are decorated with the same paired and pearled trims.  (The colors used in the fashion plate, it should be noted, are specified in the text.)  Her sleeves have a muslin ruffle beneath a puffed sleeve, which is trimmed on the upper arm with a ruched band.  While she has a bow at the front of her neckline like the other images, her other bows are on the places where the skirt is gathered up rather than her sleeves.  She wears matching bracelets and a double-stranded pearl choker with a pendant.

The young woman is dressed in a fairly plain polonaise, trimmed only with bands and cuffs of a contrasting color.  Her stomacher is divided into three parts with some sort of cord or braid.  There is a scarf around her neck.

The Duchess of Gordon with her Son, George Romney, 1778; National Galleries Scotland PG 2208

The Duchess is wearing a white polonaise.  The petticoat has a white flounce, and the neckline and skirt-fronts have self-fabric ruffles.  Most interestingly, the polonaise has long sleeves, which have another ruffle at the wrist.  There is a thin line running up the center of the stomacher (which also has a ruffle along the bottom), which, along with the amount of the torso covered by the stomacher where the dress falls back, possibly indicates that the stomacher is false, and is made of two panels which are attached to the polonaise. 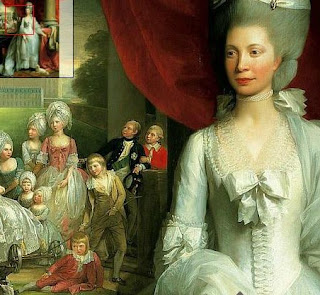 Queen Charlotte's bodice meets in the front with a trimmed closure and a large bow with pinked edges.  (A similar bow holds her multi-stranded, twisted pearl choker to her neck.)  Her sleeves have ruched gauze cuffs, also trimmed with bows, and her kerchief is extremely fine.  One of her daughters on the side, probably Crown Princess Charlotte, seems to be wearing a polonaise, with cutaway fronts, some kind of trim up the front of the stomacher, and ruched gauze cuffs. 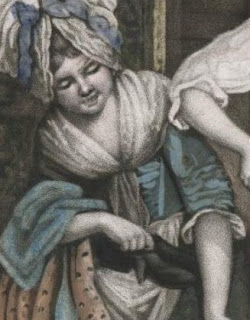 This maid is dressed much more conventionally than her breeched mistress.  The lighter lines on her bodice and sleeve seem to indicate that her gown has a stomacher and her sleeve either has a turned-up cuff or fits loosely and wrinkles around the elbow. 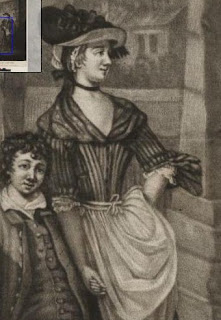 The woman's gown has robings and a stomacher, perhaps a compère, and her sleeves, which end above the elbow, have self-fabric flounces and are trimmed with ruched strips around the arm.  She is wearing a black ribbon choker, an apron tied in the front, and a dark, patterned kerchief. 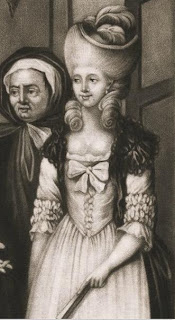 This fashionable young woman's gown has a bodice that closes center front, and sleeves with ruched cuffs.  It's not clear whether she is wearing a dark, short-sleeved overgown, or whether the gathered short sleeves and dark back and skirt are actually a part of the gown.

This is definitely a representation of one gown rather than an over- and under-gown.  Her undersleeves are long, and end in ruffles.  Her stomacher is drawn with a line down the center, possibly indicating that it is two panels.  The woman is also wearing a large white scarf over her petticoat and under the gown, and a smaller one around her neck.


The end of the decade was an interesting time in clothing.  For the rich, the transition continued into a bodice that closed center front in 1777, though the polonaise-style front continued to be worn.  Poor and middle class women, however, would have to consider whether or not they wanted to send the message that they considered themselves more fashionable than their peers - and since clothing was expensive, it might also suggest that they had participated in immoral acts to get such finery.  Gowns with robings and stomachers were seen on poorer women to the end of the decade, which implies that they would commonly be seen on campfollowers and working women during the Revolutionary War.
1770s 18th century gown research