When I went to Williamsburg, I knew that I wanted to buy some fabric at Mary Dickinson’s store.  Well, I didn’t know at first; I forgot until I saw the store and went, “OH, YES, OF COURSE I MUST.”  And I’ve wanted to make a polonaise* for a while, both because they’re cool and because I should put my money where my mouth is, or something, and make one if I’m going to make a post every time I come across a reference to them.

*a large part of me wants to spell it “polonese” because I’m getting more into using English terms, but another part of me is fairly sure that a) that would look weird to everyone and b) I’ve got enough problems insisting on a stricter definition of the polonaise, do I really need to compound it by being crazy about spelling as well?

I was probably influenced by the heat into choosing one called something something "blossoms" (I think?  It's a very large floral chintz-type print - I think it's the one you can see a bit of on Sarah in the pictures here on Two Nerdy History Girls) as it has a white ground.  It’s very beautiful, but the trouble is that fairly soon after ordering it I started wondering if it were even close to being suitable for a polonaise.  I know from past research that it was considered by some to be a style of dress that only the wealthy ought to wear; paintings of women in polonaises show them made in silk. 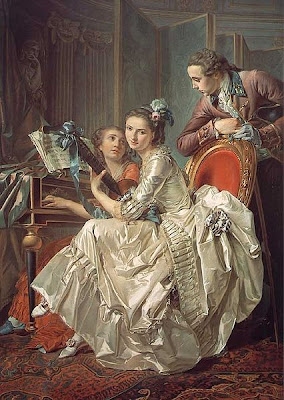 
I thought that I’d better go back to the fashion plates first, because I knew that a lot of them were showing walking and negligee dress, which might be more casual.  Fortunately, I did find a few good leads. 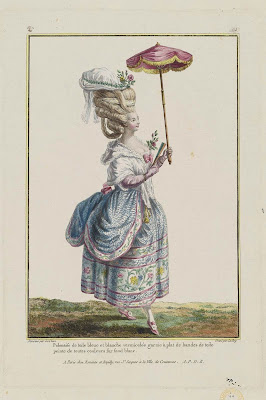 These two (the second is a polonaise jacket and I'm counting it) are printed linen in very similar patterns: a blue vermicelli ground, with a floral border.  That’s not really the same as printed cotton - and it's not very similar to my fabric - but it’s similar in terms of value at the time.  There are also other fashion plates with polonaises in muslin, striped Indian cotton, and a floral printed cotton.  So cotton and prints in general are all right.

I like studying extant examples, but the trouble here is that there aren’t very many of them, all of them that I know of are silk, and none of them in a silk patterned anything like this cotton.  (What of this example in the V&A, you say?  I'm not sure it counts.  The skirt looks like it's cut like a polonaise, rounded, but the bodice is fitted with a waist seam and it's been altered, so who knows what that skirt was like originally.)  But when it comes to cotton clothing, absence of evidence is definitely not evidence of absence, as cotton degrades pretty easily – it also tends to be more attractive for cutting up for patchwork or rags, as it’s less shiny.

The fabric hasn’t arrived yet and I have a lot of other things to do right now so this isn’t exactly a pressing quandary, but I want to be sure it's completely right for a polonaise.  I'm pretty sure it's acceptable.  My issue is that I have a principle of not doing anything I can’t justify to a hypothetical person who comes up to me and demands to know my documentation for doing such-and-such.  (This is not a principle I think everyone else needs to hold to!)  This isn’t because I worry that it’s going to happen – I’m nearly certain it won’t ever – but for me, costuming is an extension of my research.  Not so much in the sense that it’s experimental archaeology, although it can be; more in the sense that the sewing is the last part of the research, researching inspires me to sew, or to want to sew (let's be honest).  Also, I’m unnecessarily serious about everything.  And if that hypothetical person ever does show up, I want to be smug and reduce them to a stammer.
1770s 1780s 18th century polonaise research