August 12, 2012
The Marie Antoinette bundle contains two hardcovers, one by Hilaire Belloc and one by Bernardine Kielty. 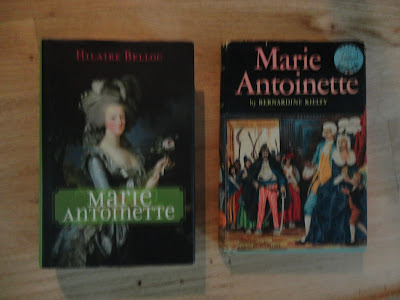 Belloc's biography was originally written in the very early twentieth century, and it's not an easy read.  However, it's also pro-Marie Antoinette and is considered a classic.  Here's a sample, given on the back cover:


She had preserved her carriage, which all who knew her had regarded since her childhood as the chief expression of her soul.  She still moved with solemnity and with that exaggeration but unflinching pose of the head which, in the surroundings of Versailles, had seemed to some so queenly, to others so affected; which here, in her last hours, seemed to all, as she still preserved it, so defiant.  For the rest she was not the same.  Her glance seemed dull and full of weariness; the constant loss of blood which she had suffered during those many weeks spent below ground had paled her so that the artificial, painted red of her cheeks was awful in that grey morning, and her still ample hair was ashen and touched with white, save where some traces of its old auburn could be, perhaps, distinguished.

Kielty's version is mostly for kitsch factor - it's from 1955 and looks it. The one review on Amazon calls it socialist and anti-Marie Antoinette, but a quick skim proves it to be as sympathetic as anyone else's.  The writing style is perfect for an interested older child. 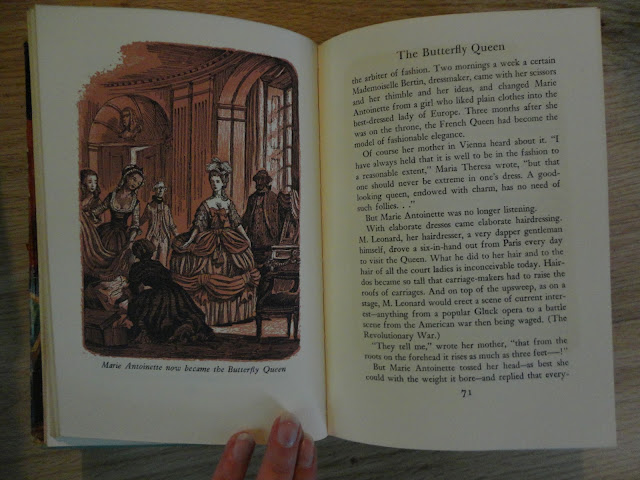 As with last week, comment before midnight on Friday to win this pair!
books giveaway