August 11, 2012
I received my first pattern for the Vintage Pattern Lending Library 1912 Project back in June, but didn't get around to starting because of Reasons.  I think I'd originally wanted to make it full-size for myself to wear, but, er, that would require getting myself some suitable fabric.  Whereas I have a lot of scraps in a bag in the basement, definitely enough to make up a skirt in the size that the original pattern pieces are. 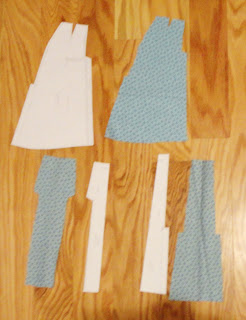 I cut them out of a cute blue cotton I used several years ago to make a (very unflattering) sundress.  It makes it a bit harder to see the details, though.


I believe that I used the translated directions, not rewritten ones, but it didn't even occur to me until I was looking at the checklist for my writeup because they were so clear.  This is a simple pattern, though, and I didn't end up doing the fiddly things (like buttons and waist tapes) that might have required more instructions.  Maybe next time, we shall see!  If I do make the next thing to scale again, though, I will try to make it to fit a scale version of me so I can make some effort at alterations. 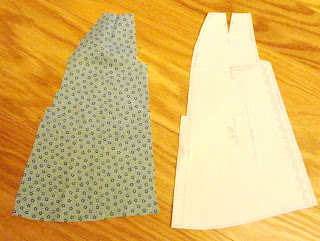 My first act after cutting out the pieces was to do up the dart in the side gores, and then to fold down and baste the places where the front and back pieces are supposed to lap the others.  Normally I would probably just pin them, but my seam allowances were so tiny that it made it simpler to baste them down. 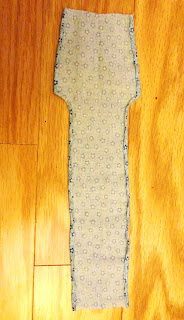 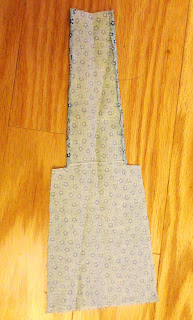 As it said to do in the directions, I sewed the seams that end up inside the side back pleats - down the sides of the tabs on the back piece pictured above.  The directions also said to sew across the top of the tabs, which I did, but after I pinned and pressed the pleats into place, it seemed like it would make more sense to leave the top edge unsewn, then top-stitch it down after pleating and finish the edges on the inside.  I might check a skirt I know of at the Chapman that has similar pleats and see what method they used there.  After that, I top-stitched down the upper part of the side back seams on both sides (and pulled out the basting stitches). 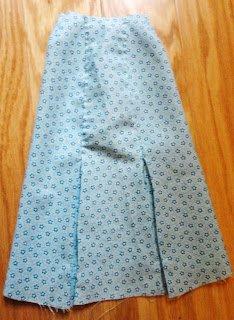 Because the side gores are curved along that edge, the skirt doesn't lay flat and so it looks a bit odd.  If I'd been making it larger I'd have pressed it up around the hips, but it's the size of my forearm and that would have been awkward and difficult.  Due to the tininess of the pleats, I had a tricky time just getting them. 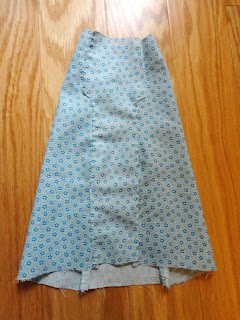 Then came the front.  I top-stitched the entire right side front seam, and then moved to the left.  The skirt is supposed to open on the left side front, so I only sewed the lower part of the seam and the bottom of the tab.  The instructions say to use a hook and eye and snaps to close it; I'd have put a row of three snaps and a hook and eye at the top if I had teeny-weeny ones. 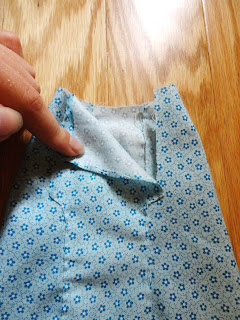 I'd call myself an intermediate sewer who often makes beginner mistakes, but I think a beginner could make this pattern.  It's not heavily fitted and requires no special techniques.  There are only four seams, too.

To sum up, here is the checklist provided by the VPLL: