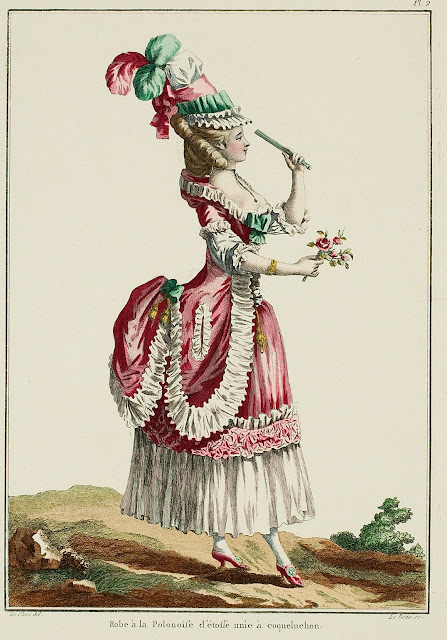 Polonaise with pockets and hood,* or winter Polonaise.  These gowns are very narrow in front, and leave free the little vest** trimmed down the center with and surrounded by a large ribbon.

The wings and the rounded tail are pulled up very high, as in the preceding print, with ribbons or with cords and tassels.

Large ruffle, covered at the top with a bouilloné band of the same stuff as the rest of the clothing.  Narrow cuffs, with bons-hommes.

Chignon hair is falling, cut by two diagonal curls which touch at one end.

Hat à la Biscayenne, composed of a row of pleated gauze, tilted on the head, forming brims; a large ribbon, in box pleats, surrounding the hat crown and supported by a second plain ribbon, ending in the back with a double bow: the crown of the hat, in a gauze pouf, is half-covered by a panache of three ostrich plumes, a little raised, of which the root is hidden in the double bow.

Shoes are similar to the rest of the ensemble in their assortment of colors, with a round rosette.  Watch cord trimmed with tufts of hair and gold, with hanging charms.

** There is a stomacher or waistcoat worn under the polonaise, not visible in the plate. 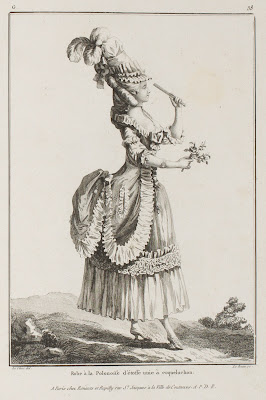