September 20, 2012
I recently discovered that the Galerie des Modes plates with their short captions also had longer descriptions that went with them, and decided it would be a great idea to go through them all and translate them. There are nine issues, each with several plates, and I'll post each separately.  Below, you will find the introduction to the first volume, as well as the plates and descriptions from the first issue.  Critiques of my translation are welcomed. 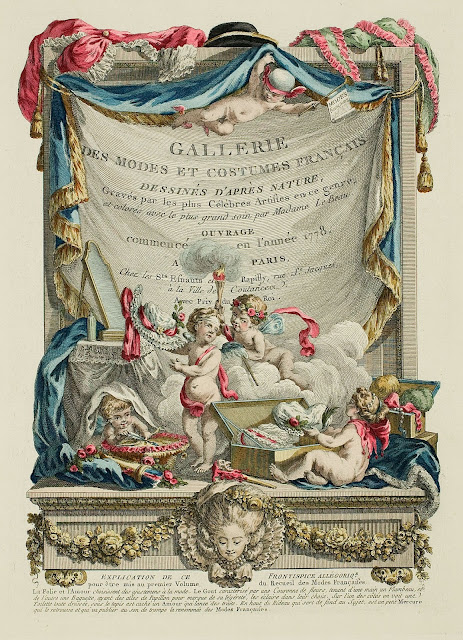 Explanation of the Allegorical Frontispiece placed in the first Volume of the Collection of French Styles.   Folly and Love choose the changes to fashion.  Taste, marked by a Crown of flowers, holding a torch in one hand and a rod in the other, having Butterfly wings to show its lightness, illuminates their choice.  On one side, one sees a dressed Toilette; under its skirt Love hides, shooting arrows.  On top of the curtain at the back of the Picture is a little Mercury, who holds it up and who will announce with his trumpet the fame of the FRENCH FASHIONS. 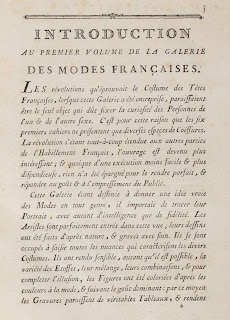 INTRODUCTION TO THE FIRST VOLUME OF THE GALERIE DES MODES FRANCAISES

The changes that French Headwear underwent, before this Gallery was undertaken, appeared to be the only thing that could gain the curiosity of members of both sexes.  It is for this reason that the first six books present only different types of Coiffures.  The revolution being suddenly spread to other parts of French Dress, this work has become more interesting; and although the execution is less easy and more expensive; nothing was spared to render it perfectly, and to answer to the taste and enthusiasm of the Public.

This Gallery being intended to give a true idea of Fashions of all types, it was important to draw their Portrait with as much intelligence as fidelity.  The Artists are perfectly agreed in this view: their drawings were made from real life and engraved with care.  They embraced all the nuances that characterize the diverse Ensembles.  As far as possible, they made sense of the variety of Materials, their mixed uses, their combinations, and to complete the illusion, the Figures were colored with fashionable colors, and following the dominant taste: by this means the Plates look like veritable Paintings, and render, in a manner as agreeable as it is correct, the ensemble of Dress and each part that composes it. 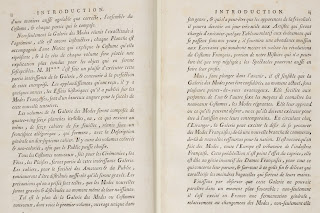 The Galerie des Modes does not only combine accuracy with approval, it is also instructive; each Plate is accompanied by a Note which explains the Dress it represents, and at the front of each volume will be placed a more extensive explanation for the more delicate objects.  M. M*** had the pleasure of executing this interesting part of the Gallery, and of contributing to the perfection of this enterprise.  The applause that was received, several years ago, for the historic Essays he published on French Fashion, are a happy omen for the success of this new attempt.

The volumes of the Galerie des Modes will be composed of ninety-six plates in-folio, or, what amounts to the same thing, of sixteen books of six pages, combined with an allegorical frontispiece, which will unite with the general Description in the seventeenth book.  There will be colored and uncolored volumes, from which the Public may choose.

All the new Clothes, either for Ceremonies, Parties, or Leisure, will be part of this interesting Gallery.  The books, for the facility of Fashion-Lovers and the Public, will continue to be distributed as soon as they are engraved.  The precautions we take are such that the new Fashions will be engraved and distributed at the moment of their birth.

Such is the plan of the new Galerie des Modes ou Costumes, of which you see the first volume, a unique work in its genre, and which cannot have the appearance of frivolity: it will become very useful, one day, to Artists who are charged with executing some Painting based on events which pass under our eyes; it will provide an abundant harvest to Writers which wish to showcase the changes in French Costume, a piece of our History which has been, perhaps, too neglected; the Theatre will also profit from it. 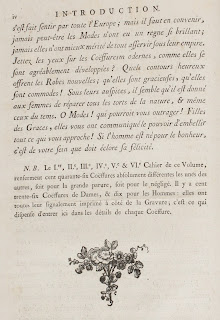 But, without diving into the future, it is obvious that the Galerie des Modes can be considered at this time from several positive points of view.  It gives people of either sex the means to understand new Clothing, the reigning Fashions.  It teaches them that they can be desired, or that they should work to fit in with their contemporaries.  In circulating to the home of the Foreigner, the Gallery can excite the desire to procure French Fashion; there a new branch of commerce, there new resources for the nation.  It is well-known that, in Fashion, all of Europe is dependent on the French industry.  This predilection is not based on whim, it is due to the inventive genius of French Ladies for all that concerns their finery, and above all the fine and delicate taste which characterizes the lesser fancies that come from their hands.

We finish by observing that this Gallery could not appear at a more favorable time: not only is it exciting a general agitation in France, relative to the changing of the Fashions, not only is it felt by the whole of Europe; but one must admit, Fashion may never have had a reign so brilliant; never have better merited for all to serve in its empire.  Cast your eyes on the modern Coiffures, as they are pleasantly developed!  What happy shapes the new Gowns offer; how graceful, how comfortable!  Under their auspices, it seems that it is given to women to repair all the shortcomings of nature, and even those of time.  O Fashion! who could offend you!  Daughters of the Graces, it gives you the power to beautify all that comes near you!  If man is born for happiness, it is from your womb that felicity must hatch.

NB: The first, second, third, fourth, fifth, and sixth Books of this Volume contain 146 absolutely different Coiffures, for the most formal dress and for informal dress.  There are 136 Ladies' Coiffures and ten for Men; they have all their description printed next to the Plate; it is that which gives the details of each Style.
1770s 18th century Galerie des Modes