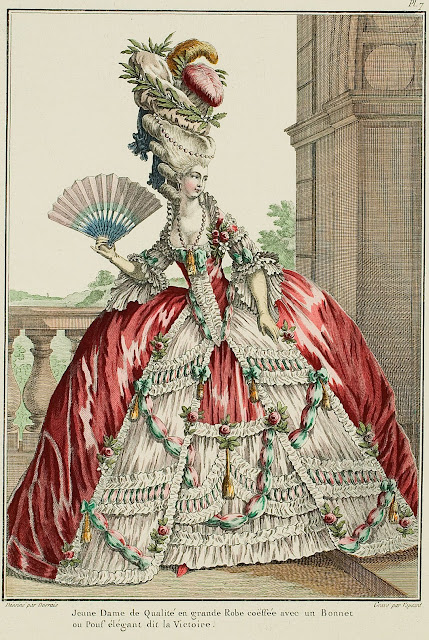 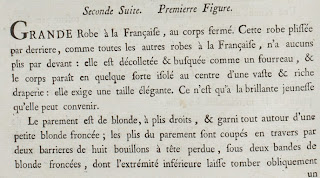 Grande sacque, with closed bodice.  This gown is pleated in the back, like all the other sacques, but has no pleats in the front: it is low-cut and busquée like a scabbard,* and the bodice seems, as it were, isolated in the center of a vast and rich drapery.  It requires an elegant figure from the wearer; it is only suitable for the beautiful young woman.


The parement is of blonde lace in even pleats, and cut by narrow, gathered blonde lace; the pleats on the flat trim are crossed by two rows of eight bouillons, edges covered with two bands of gathered lace; the ends of the bouillonné ribbons are left to fall diagonally, held up with tassels; the upper edge of the parement is covered with a third bouillonné ribbon, which marks the waistline and shows its lightness; two straight, gathered bands are the only trimmings on the bodice, which is busqué in a point; bunches of flowers are placed between the tassels on the parement, two on the front edge and three on the other.

Volant in regular pleats very high on the petticoat, with two gathered bands across it resembling those on the parement, positioned so as to curve and come up to join at one end in the center of the flounce, under a bunch of flowers which holds a hanging tassel. 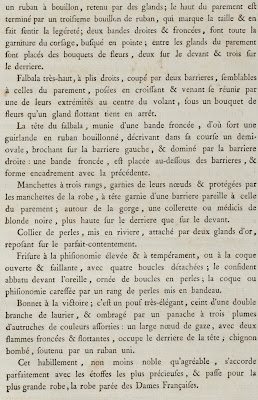 The head of the ruffle has a gathered band where a garland of bouillonné ribbon is fastened at the ends and describes a half-oval, passing under the trim on the left and passing over it on the right: a gathered band runs below the trim and forms a frame with the upper band.

Manchettes with three rows of ruffles, trimmed with with bows, protected by the manchettes of the gown, and trimmed at the top with a gathered band.  Around the throat is a collarette or a "medici" of black lace, higher in the back than the front.

Hair done in the raised phisionomie style and in installments, or with an open and protruding coque, with four separated curls; the confident falling in front of the ear, which bears a pearl earring; the coque or phisionomie is caressed by a row of pearls put in a head-band.

"Victory" cap; this is a very elegant pouf, girded with a double laurel branch, and shaded by a panache of three ostrich plumes in various colors: a large gauze bow with two gathered and hanging ends is on the back of the head; bulging chignon, supported by a solid-colored ribbon.

This dress, no less excellent than it is pretty, agrees perfectly with less expensive material, and acts as the most full dress, the adorned gown of the French Ladies.***

* Or possibly like a gown en fourreau; busqué may mean that it is boned on the opening.
** With individually-set stones.
*** For more on the robe parée, see my post here.  These were worn for evening entertainments at court and eventually became the official presentation costume.  It is here described as the "plus grande robe" because the robe de cour was seen as a different animal, not made along the lines of ordinary formal dress. 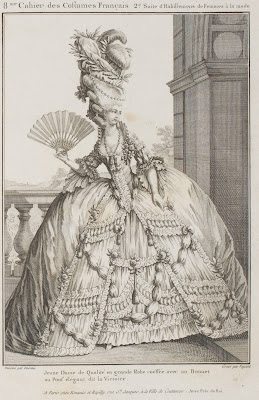