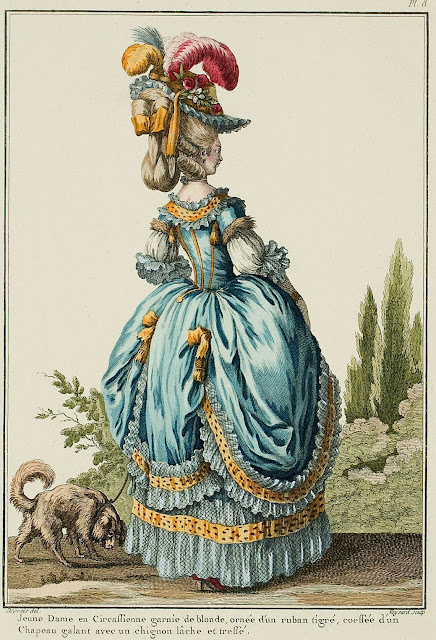 Young Lady in a Circassienne trimmed with blonde lace, decorated with a streaked ribbon, wearing a romantic Hat and a loose, braided chignon. (1778)

Of all the beauties which decorate the seraglio of the Grand Seigneur, there are none that rival those who come from Circassia.  One would be tempted to believe that in that happy country, nature takes pleasure in not forming women except in the most agreeable and perfect models; their dress answers to their charms, and if the Graces were not nude, they would not have adopted any other dress.  But its use is not given to all women: only those of a light and almost airy size should aspire to its advantages. 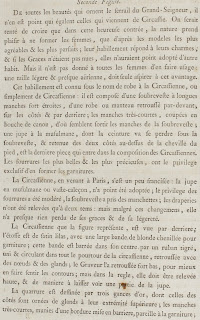 This dress is known under the name "robe à la Circassienne", or simply "Circassienne": it is composed of an undervest with long, very tight sleeves, and a gown or overcoat pulled up behind on the sides and in back; very short sleeves, cut like the mouth of a canon, from which the undervest's sleeves seem to come; a Muslim petticoat,* the waist of which is hidden under the undervest and which reaches below the ankle on two sides, it is the last piece in the composition of the Circassienne.  The most beautiful and precious furs have the exclusive privilege of being used in the trimming.

The Circassienne, in coming to Paris, is made a little Frenchified: the Muslim petticoat or wide-trousers** were never adopted; the privilege of furs was moderated, the underbodice became manchettes; the draperies were only pulled up two times: but despite the changes, it has lost nothing of its graces and lightness.

The Circassienne this figure represents is seen from the back; the material is lilac satin, with a large band of blonde lace with chenille for trimming; this band is striped in the center by a streaked ribbon, solid-colored and encircling the edges of the circassienne, which is pulled up with bows and tassels; the Engraver has pulled it up very low, to better show its shape, but as a rule, it must be pulled up high, and in a manner to let a part of the petticoat show.

The back is picked out with three gold braids, the ones on the sides decorated with tassels at their highest end; the very short sleeves have a border made as a barrier, similar to the trimming; the sleeves of the underjacket, very yellow satin, trimmed with bonshommes or little manchettes with two rows of ruffles.

Satin petticoat that matches the undervest; volante a little raised, cut at two-thirds of its height by a ribbon like that on the trim. 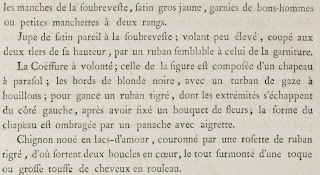 Coiffure may be done at will; that of the figure is composed of a parasol hat, the edges of black blonde lace, wrapped with ruched gauze; a streaked ribbon for a braid, whose ends are escaping on the left side, after having fixed a bunch of flowers, the crown of the hat is shaded by a panache with an aigrette.

Chignon knotted in love-locks, topped with a bow of streaked ribbon, from which come two heart-curls, all surmounted with a toque or large tuft of rolled hair.

* "jupe à la musulmane"
** "vaste-caleçon"; both of these may refer to the same article of clothing, the first being a sort of metaphorical use of "jupe" 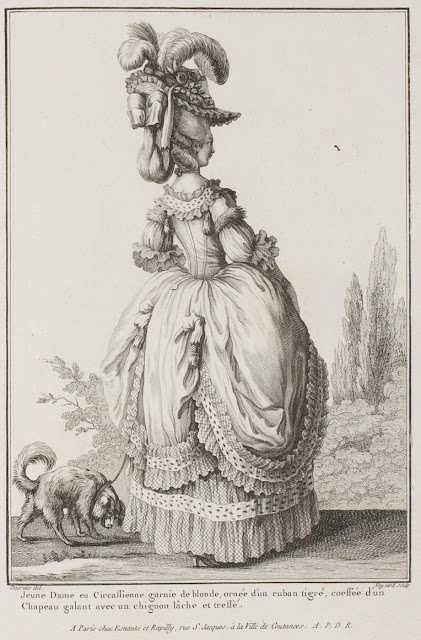