September 18, 2012
My next portrait costume analysis is of Euphemia White Van Rensselaer, by George P. A. Healy. 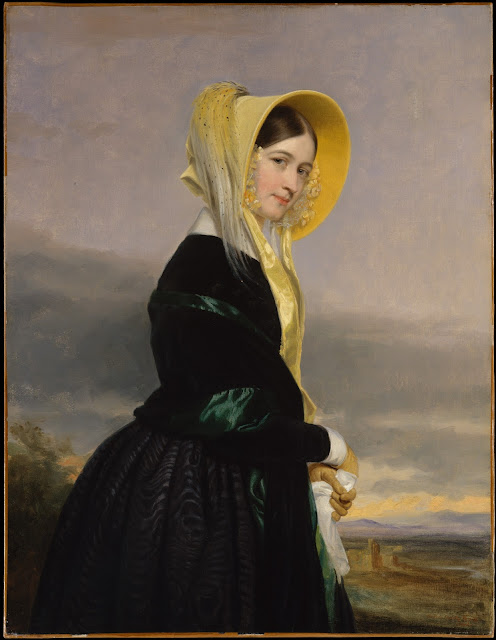 Euphemia was the third daughter and eighth child of Stephen Van Rensselaer III and his second wife, Cornelia Paterson Van Rensselaer (the daughter of a former governor of New Jersey).  The Van Rensselaers were the premier landowners of upstate New York: Kiliaen Van Rensselaer (1586-1643), one of the original Dutch patroons, founded Rensselaerwyck in the Albany area.  Stephen is supposed to be the tenth richest American in history, according to Fortune magazine, inheriting the largest estate in New York at the time of his father's death.  (Read more about him and the family here and here.)  Euphemia was related to the Schuylers, the Westerlos, the Livingstons, the Ten Broecks - other families of wealth, prestige, and long standing.  It is a sure bet that anyone named "Van Rensselaer" is as up-to-the-minute fashionably dressed as possible.  She was painted in Paris, with the background possibly intended to depict Italy.

On May 2, the year after the portrait was painted, Euphemia married John Chruch Cruger, who was himself related to Cuylers and Ten Broecks, and whose ancestors were as deeply connected to New York City as hers were to Albany.  In 1835, he had bought an island in the Hudson River, near Tivoli.  The two had three children, Stephen Van Rensselaer, Cornelia (who donated the painting to the Metropolitan Museum of Art), and Catharine. The same year the portrait was painted, one of Euphemia's brothers had a child that was named for her, who later became a nun. 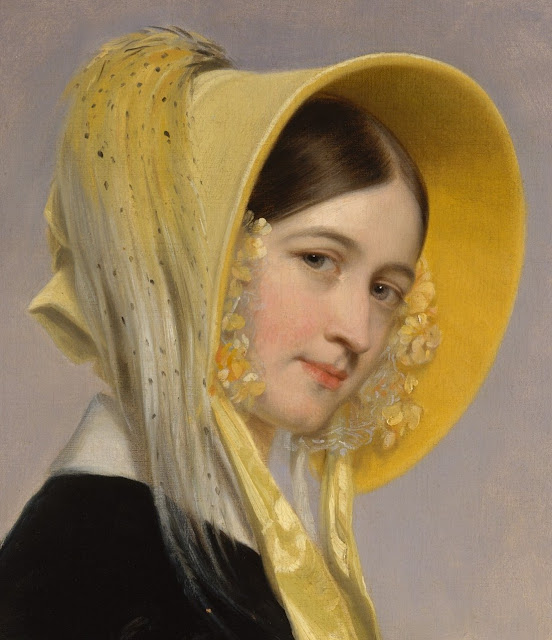 Euphemia's bonnet is covered inside with a dark yellow fabric, possibly wool, and outside with a creamier yellow, with a pleated skirt in the back.  It's decorated with a long yellow plume, possibly egret, fading to white at the end, and speckled with black.  It has two long ties of yellow silk taffeta, and two ties of white cotton.  (See The Ladies National Magazine for a rundown of recent bonnet history to 1845.) Transparent lace or gauze ruffles with artificial yellow flowers are sewn to the inside of the bonnet to give the impression of a cap, as seen in this fashion plate or this one from 1840.

Under the bonnet, her hair is parted down the middle.  The back is most likely in a bun or chignon, and she must have a demure hairstyle with no ringlets, as they would either show or be crushed by the bonnet. 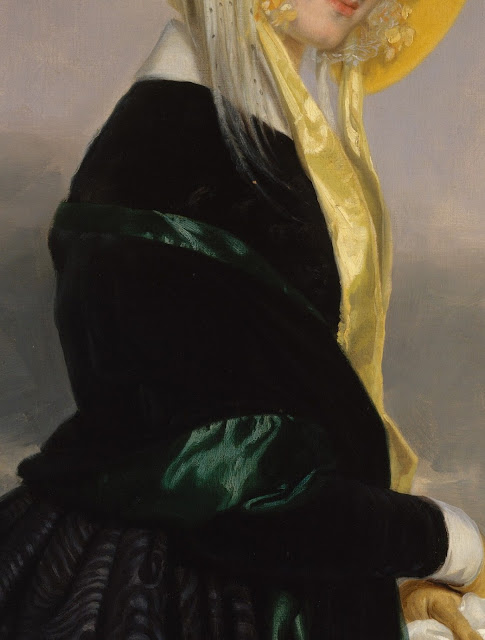 Euphemia is wearing a black silk velvet riding jacket.  At this time, fashionable women did not otherwise wear mismatching bodices and skirts, and cold-weather outerwear that went over a gown was larger and more enveloping.  The jacket has a white collar and cuffs, probably basted in, and is decorated with a line of non-functional buttons curving in from the outer shoulder to the front of the waist, most likely one on each side; placing seams, buttons, or ruffles in this manner was a very common way to visually narrow the waist.  It also buttons at the wrists.

Over the jacket, Euphemia has a very dark green silk velvet shawl, bordered with wide strips of green silk taffeta.  The shawl is long and narrow, and most likely rectangular. 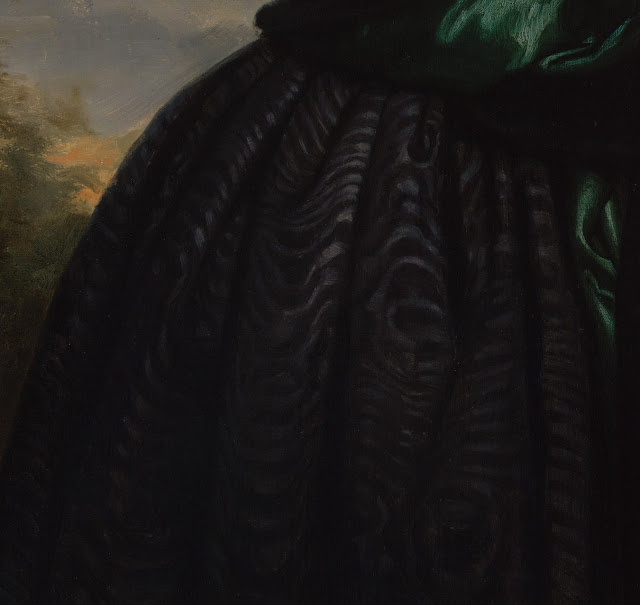 Euphemia's skirt is made of black silk moiré, and is most likely cartridge pleated to a waistband.  Underneath, she is probably wearing a horsehair petticoat and/or a petticoat with some sort of bustle (a term used in the period - pictured at lower right) to help create the necessary fullness and spring at the back.

Euphemia's gloves are a beige leather, with three tucks over the top of the hand; identical gloves appear in nearly all winter, autumn, and spring fashion plates, and yellow, brown, and tan were considered "pleasing hues".  Holding a white handkerchief in these tan leather gloves was also a common pose in fashion plates.