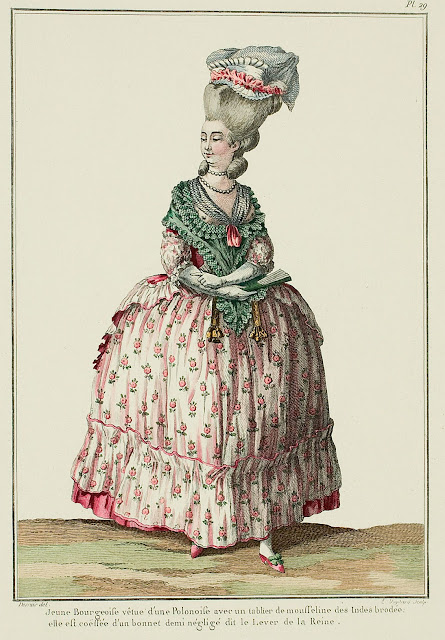 Young middle class woman dressed in a Polonaise with an embroidered Indian muslin apron.  She is wearing a half-négligée cap called "the Queen's Lever". (1778)

Coupé polonaise: this gowns are made like ordinary polonaises; they are only different in the petticoat, which must be without a volant or trim, but a vast apron serves as a veil and entirely covers the front.  A large flounce or demi-volant ornaments the apron, the head of which is hidden under the wings of the polonaise. 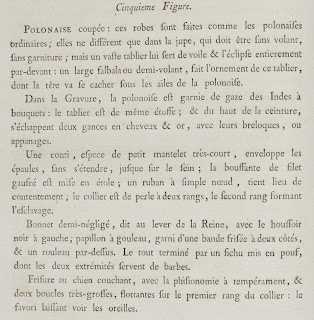 In the Print, the polonaise is trimmed with Indian gauze with bouquets on it: the apron is of the same stuff, and two cords of hair and gold hang from the top of the belt with their charms.

A conti, a type of very short little mantelet, envelops the shoulders without reaching to the chest; the goffered filet lace bouffante is placed as a stole; a ribbon in a simple knot in place of the contentement; the necklace is two rows of pearls, the second row as the "slave".

Half-négligée cap, called "the Queen's Lever",with a black brush on the left; papillon in gouleau, trimmed with a gathered band on two sides, and a roll above.  The whole is finished by a fichu placed as a pouf, with the two ends serving as lappets.

Hair in chien couchant, with the phisionomie to taste and two very large curls hanging on the first row of the necklace: the favori allowing the sight of the ears. 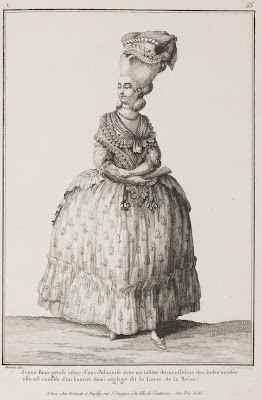