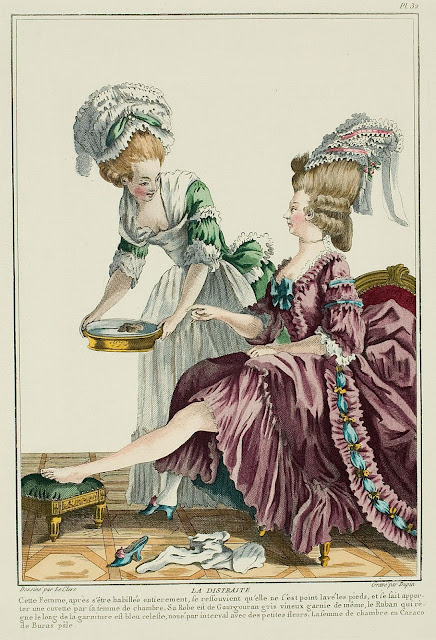 THE DISTRACTED WOMAN.  This woman, after being entirely dressed, remembers that she has not washed her feet, and is brought a basin by her chambermaid.  Her Gown is of wine-grey Gourgouran* trimmed with the same, the ribbon around the trim is sky blue, tied at intervals with little flowers.  The chambermaid is in a caraco of pale Buras. (1778) 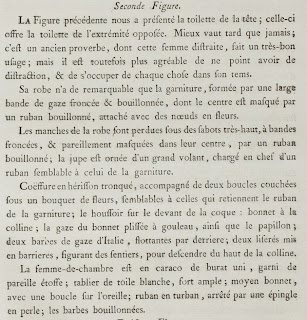 Her gown is only remarkable for its trim, formed with a large band of gathered and ruched gauze, of which the center is covered with a bouillonné ribbon, attached with flower-knots.

The sleeves of the gown are lost under very high sabot cuffs, gathered bands, and similarly masked in the center with a bouillonné ribbon; the petticoat is trimmed with a large volant, covered on top with a ribbon matching that of the trim.

Hair in a shortened herisson, with two curls lying under a bunch of "flowers", matching those which hold the ribbon on the trim; the brush is on the front of the coque: "hill" cap; the gauze of the bonnet is pleated à gouleau, as is the papillon; two Italian gauze lappets, hanging in the back; two narrow ribbons placed en barriere, as paths to defend the height of the hill.

The lady's maid is in a caraco of solid-colored buras, trimmed with the same material; apron of white linen, very full; medium cap, with a curl on the ear; ribbon wrapped around it, held by a pearl pin; ruched lappets. 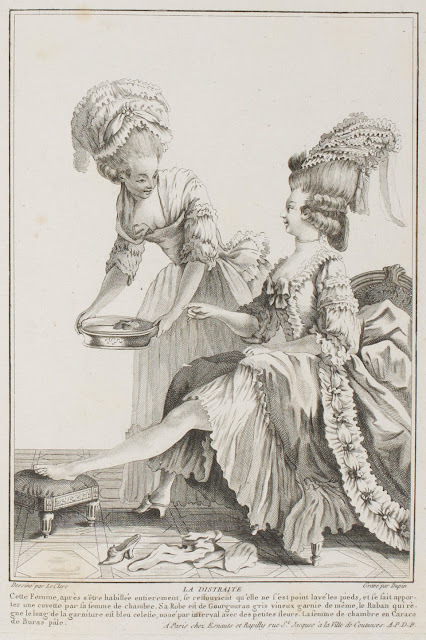