Genteel and poetic abbé, reading with enthusiasm a piece of verse that he composed. (1778) 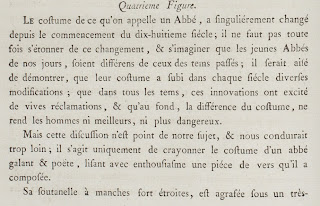 The costume of what one calls an Abbé has singularly changed since the beginning of the eighteenth century; one should not at any time be surprised by this change and imagine that the young Abbés of our time are different than those of the past; it will be easy to demonstrate that their costume has sustained diverse modifications in each century; that in all eras these innovations have excited lively protests, and that at bottom, the difference in costume makes the men neither better nor more dangerous.

But this discussion is not our subject, and we are driving too far; one is only only meant to sketch the costume of a genteel and poetic abbé, reading with enthusiasm a piece of verse that he has composed. 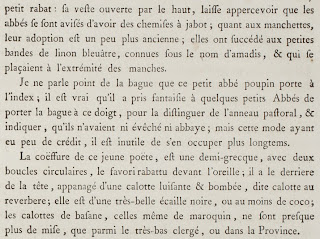 His short cassock with very narrow sleeves is fastened on a very little cravat: his vest is open at the top, leaving visible what abbés are advised to have shirts with jabots; about the manchettes, their adoption is a little more ancient; they have succeeded the little bands of bluish linen known under the name "d'amadis", and which were placed at the ends of the sleeves.

I do not speak of the ring which the tiny little abé wears on his index finger; it is true that a fancy has been taken by some little Abbés to wear a ring on their finger to distinguish the pastoral ring and indicate that they have neither a bishopric nor an abbey, but this fashion having had little credit, it is useless to consider it too long.

The coiffure of this young poet is a demi-Greek with two circular curls, the favori folding in front of the ear; he has a glossy and arched skullcap on the back of the head, called calotte au reverbere;* it is of a very beautiful black scale, or at least coconut; sheepskin caps, or even moroccan ones, are almost out of place except among the very low clergy or in the provinces. 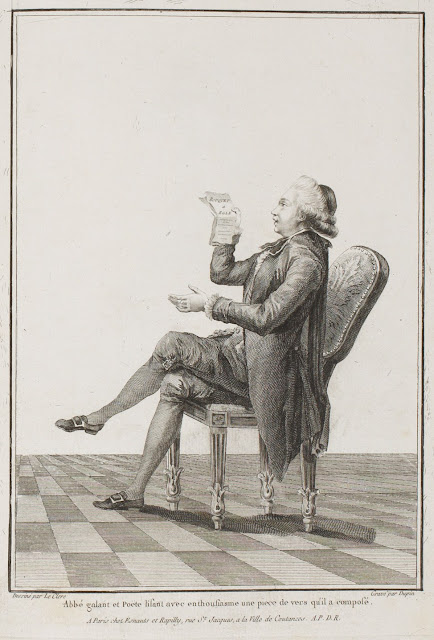