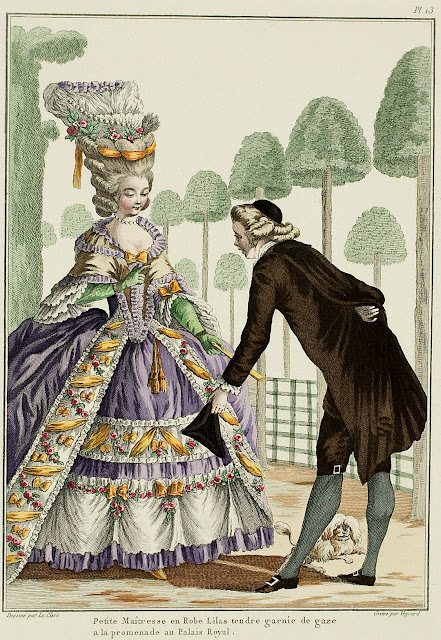 Little Mistress in a soft Lilac Gown trimmed with gauze, in the promenade of the Royal Palace. (1778) 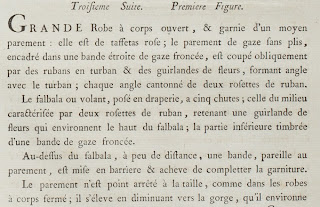 Grande robe with open bodice, trimmed with a medium parement: it is of pink taffeta.  The parement of unpleated gauze, framed with a straight band of gathered gauze, is cut obliquely by ribbons en turban* and garlands of flowers, forming angles with the "turbans"; each angle provides a home for two ribbon bows.

The volant is draped in five places; two in the middle have ribbon bows, holding a garland which trims the top of the flounce; the lower part is trimmed with a band of gathered gauze.

Above the volant, at a short distance, is placed a barrier made of a band similar to the parement to finish the trimming.

The parement does not end at the waist, as in the gowns with closed bodices; it rises to the neck while getting smaller and unites at the top of the back; this would be seen except for the taffeta mantelet trimmed with blonde lace, which covers the figure's shoulders: the mantelet, fastened under the contentement, is very short so as not to cover the triple manchettes, the trim, and the watch cord with sequined tassels.

Hair with four curls and an open coque in a heart shape, protected by a love-band, pinched on two sides of the coque, whose ends pass through the two higher curls and hang in the back, at the wind's will.

Black aigrette on the left side, attached to a row of pearls placed as a barrier: spaced flowers form a second barrier, the whole to ornament a pouf cap.

The second figure represents a young, flirtatious Abbé, with a round forelock, and two straight curls connected with two curved ones: a large skullcap or Moroccan cap** covers the rest of his head.

His black taffeta overcoat is very narrow and leaves the pocketless and buttonless cassock uncovered.

Batiste manchettes, very short flaps, very large shoe buckles, folded hat to carry under the arm or hold in the hand and use for carrying or holding.

* I believe this means "giving the impression of being wrapped", or else that the ribbons actually are wrapped around the parement.
** "une large calote ou maroquine" 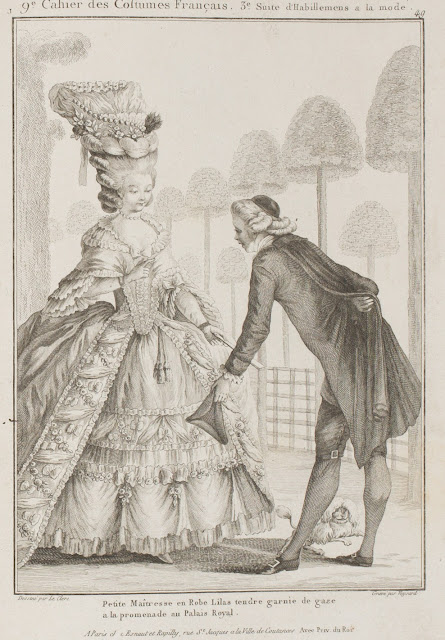