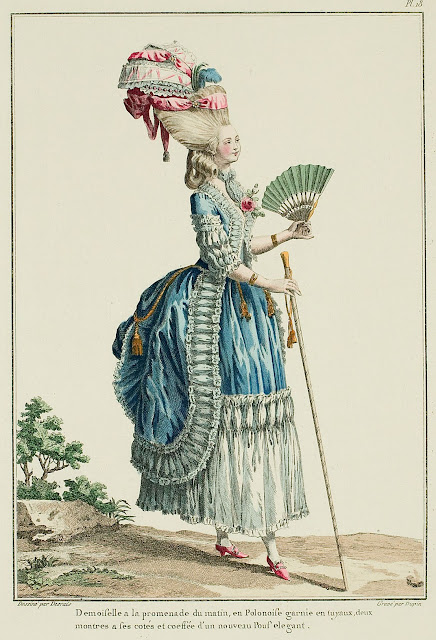 Young lady on her morning walk, in a Polonaise trimmed in pipes, two watches at her sides,
coiffed in a new, elegant pouf. (1778)

Winged polonaise.  These polonaises are made of the heaviest stuff, such as part-silk, moire,* and other similar trims; but they require the lightest: the tail, pulled high with ribbons in bows or tasseled cords, must be shorter than the two wings and very puffy.

The one in the Print is of solid-colored moire, trimmed with gauze in box pleats and pinched into pipe-shapes with open tops.  The sleeves are hidden under sabot cuffs, trimmed the same way, with a barrier above them trimmed with gauze. 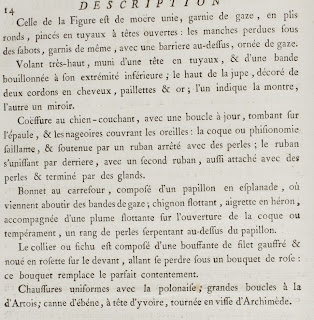 Very high volant, made in pipes at the top with a ruched band at the bottom; the top of the petticoat is decorated with two cords or hair, sequins, and gold: one holds a watch, the other a mirror.

Chien couchant coiffure with a stylish curl falling on the shoulder, and nageoires covering the ears; the coque or phisionomie protrudes and is held in with a ribbon caught with pearls, the ribbon meeting a second ribbon in the back, also caught with pearls and ending in tassels.

"Crossroads" cap composed of a broad, flat papillon which bands of gauze reach to; chignon hair hanging, heron aigrette, accompanied by a plume hovering over the opening of the coque, or tempérament, a row of pearls meandering over the papillon.

The collar or kerchief is made of a puff of goffered filet lace, knotted in a bow in front, the ends being lost under a bunch of roses: this bouquet replaces the parfait contentement.

* La patisoie is presumably parti-soie, silk woven with another fiber (likely wool in this case); moire is defined in a contemporary dictionary as "type of silk stuff", but is translated as "mohair".


**  A type of water pump invented by Archimedes. 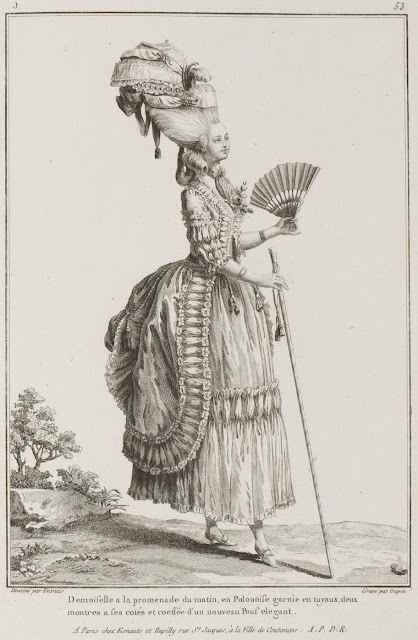