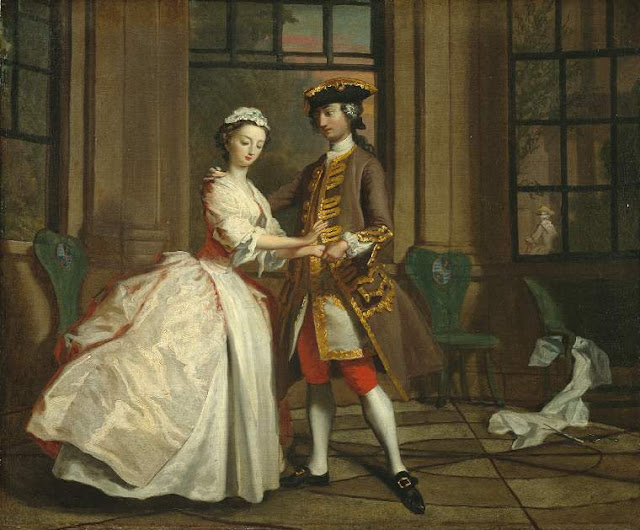 II: Pamela and Mr. B in the Summerhouse, Joseph Highmore, 1743-4; Fitzwilliam Museum M.Add.6

After the first letter, Mr. B began to make presents to Pamela of his late mother's clothes.  As the kind housekeeper, Mrs. Jervis (who is "a gentlewoman born, though she has had misfortunes"), told her that she was so pretty any future wife of Mr. B would never allow her to stay in the household, Pamela expected that she would leave to work for his sister, Lady Davers.  Unfortunately, one day while Pamela was sewing in the summer-house Mr. B approached and told her he wanted her to stay, then began to try to seduce/rape her.  She is pictured here resisting his advances. 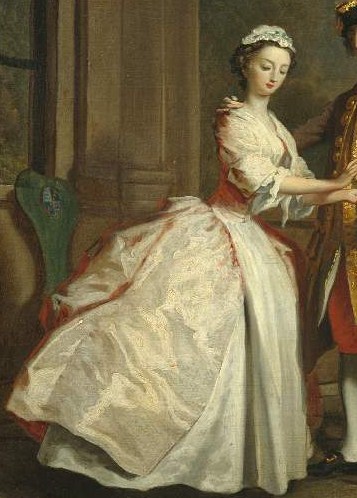 In this scene, Pamela is wearing some of the clothes Mr. B gave her, rather than her mourning.  Her mantua is a very pale pink silk taffeta, and her petticoat white; not only are they of expensive material, their light color would make them even finer, since they would require more laundering.  At the same time, because they're plain taffeta (rather than satin, damask, or brocade) and she's not wearing jewelry, she isn't transgressing too far above her station.  Once again, her dress is accompanied by ruffles on her shift sleeves, a long linen apron, and a fashionable cap, this time with a pale blue ribbon.  It looks as though her kerchief is falling over her left shoulder, or has been pulled out of the neckline of her gown or untied.

Mr. B is dressed much more formally in this picture.  (He is said in a later scene to be buying a "birth-day suit" to wear to court - although that takes place later than this, it's possible that artistic license put that suit here.)  His brown coat and grey satin waistcoat are heavily trimmed with a wide gold lace; the coat, like the dark blue one, has the buttons and buttonholes arranged in pairs on each side.  Bright red silk breeches, white silk hose, black shoes with square buckles.  A similar suit can be seen on Col. Strode in Hogarth's The Strode Family, although the colonel lacks Mr. B's gold-trimmed black tricorn hat. 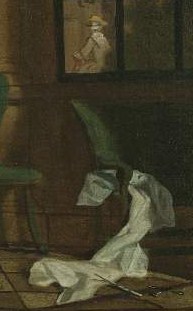 On a chair at the side of the action is Pamela's sewing, which looks to be a shift; she describes herself as working upon his linen, and the fine linen of the family, and am, besides, about flowering him a waistcoat".  Her tools have spilled to the floor, but they are difficult to make out (the Fitzwilliam Museum doesn't have a great zoom function).  The three small objects might be wound thread, but I am not sure what the long, thin one is.

Through the window, one can see a working woman, probably a servant.  She is wearing a straw hat tied over a cap larger than Pamela's, and a kerchief over a brownish-grey gown.
1740s 18th century gentlemen gown portrait analysis