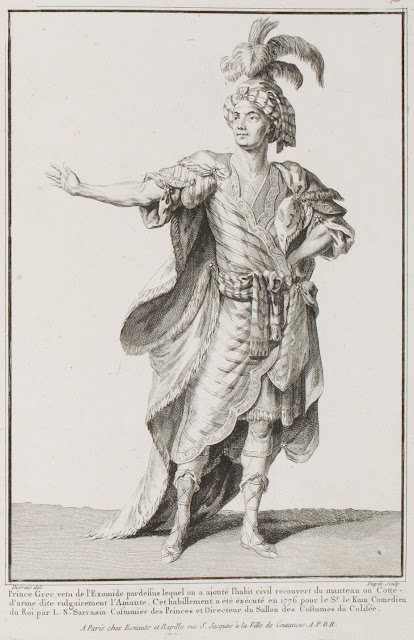 Greek Prince dressed in an Exomis* under which he has added the ordinary suit, covered with a cloak or coat of arms, called vulgarly the Mistress.  This outfit was created in 1776 for Signore Kain, Comedian to the King, by L. N. Sarrazin, Costumer to the Princes and Director of the Salon of the Costumes of the Colisée. (1778)

Greek suit, with all the accessories.  Emperor Charles-the-bald, having a great passion for Greek costume, adopted it, caused his Wife, the Empress, to adopt it, and his whole household.  It even appeared in a national assembly, and the Empress, with this new costume: but there was the inconvenience of hearing the French Lords mutter against this invention, and the Monarch was obliged to abandon it. 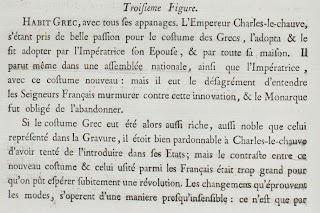 If the Greek costume had been then as rich and noble as that represented in the Print, it would have been very pardonable for Charles-the-bald to have tried to introduce it in the Estates; but the contrast between the new costume and that usually worn among the French was too large for one to be able to hope suddenly for a revolution.  The changes the fashions experience, work in a near-imperceptible manner: this is only by degree the one can bring a people to renounce entirely their former costume, as their old prejudices.