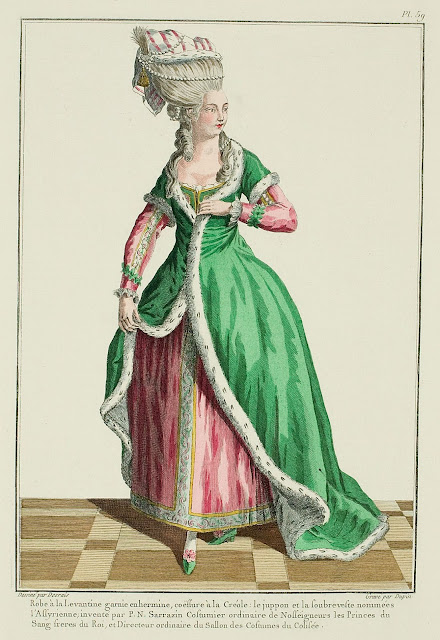 Robe à la Levantine trimmed in ermine; coiffure in Creole style.  The petticoat and undervest, called à l'Assyrienne, invented by P. N. Sarrazin, Costumer-in-ordinary to Nosseigneurs the Princes of the Blood, brothers of the King and Director-in-ordinary of the Costuming of the Colisée. (1779) 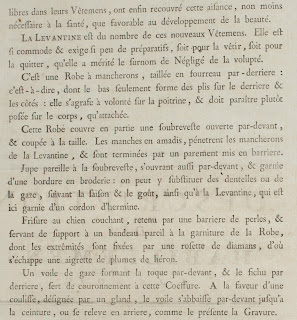 The desire to enfranchise the Ladies of the Robes, whose figures seem only to have been created to charge brilliant chains,* imagined, for some years, diverse Dresses no less comfortable than graceful.  One felt how much it was ridiculous, under the pretext of ornamenting nature, to repress it, so to speak, under the pompous trimming, in truth, only overwhelming their feet, their figures, and their limbs.  All inconvenience has been forbidden, and Frenchwomen, free in their Clothing, have finally recovered that ease which is no less necessary to the health than favorable to the development of beauty.


THE LEVANTINE is of the number of the new Dresses.  It is so comfortable and requires so few preparations, either to put it on or take it off, that it has merited the nickname, Negligée of Voluptuousness.

It is a Gown with mancherons, fitted en fourreau in back: that is to say, the skirt is only pleated on the back and the sides.**  It fastens at will over the chest, and must seem instead posed on the stays/body, which are attached.

This Gown covers in part an undervest opening in front and coupée at the waist.  Amadis sleeves come through the Levantine's mancherons, and are finished with a parement placed en barriere.

Petticoat matching the undervest, opening in the front as well, and trimmed with an embroidered border.  Lace or gauze can be substituted for it, following the season and taste, together with the Levantine, which is here trimmed with a cordon of ermine.

Hair in chien couchant, held in by a barriere of pearls, and serving as a support for a bandeau matching the trim of the Gown.  The extremities of the bandeau are fixed with a diamond rosette, from which escapes an aigrette of heron feathers.

A gauze veil forming the toque in front, and the kerchief in back, serve as the cap of this Coiffure.  With the help of a drawstring, ending with a tassel, the veil is lowered in front to the belt, or raised in back, as presented in the Print.

* Not sure about this translation. 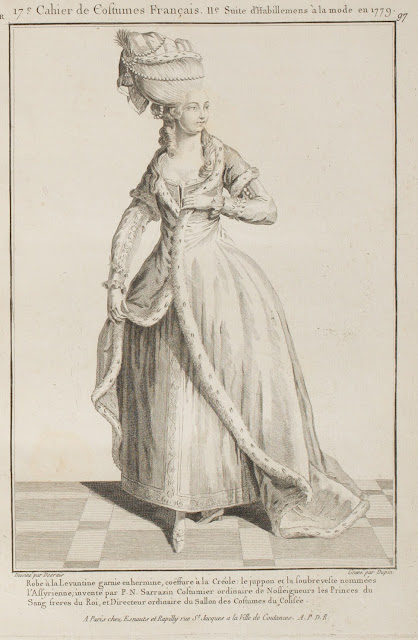