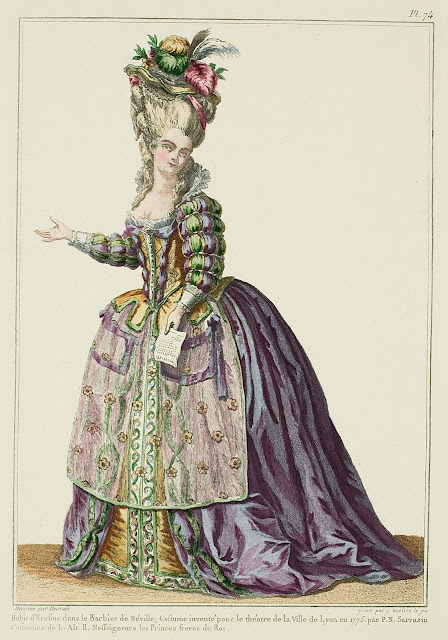 Dress of Rosine in the Barber of Seville; costume invented for the theater of the City of Lyon in 1775 by P. N. Sarrazin, Costumer to Their Royal Highnesses the Princes, Brothers of the King. (1779) 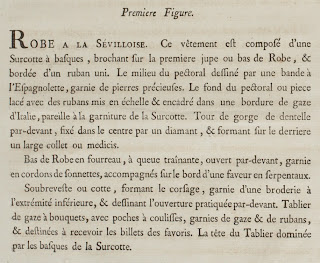 Robe à la Sevilloise.  This garment is composed of a Surcoat with basques, spreading over the first petticoat or skirt of the Gown, and bordered with a plain ribbon.  The middle of the stomacher is indicated with a band à l'Espagnolette,* trimmed with precious stones.  The base of the stomacher or piece laced in place with ribbons placed as a ladder, framed in an Italian gauze border, matching the trim on the Surcoat.  Around-the-throat of lace in front, fixed in the center with a diamond, and forming a large collar or medicis in back.

Skirt of the gown en fourreau, with training tail, open in the front, trimmed with cordons of little round bells,** on the border of ribbon en serpentaux.

Undervest or coat forming the bodice, trimmed with embroidery at the lower edge, and indicating the practical opening in front.  Sprigged gauze apron, with drawstring pockets, trimmed with gauze and ribbon, destined to receive letters from her favorites.  The top of the Apron is covered by the basques of the Surcoat.

Hair en chien couchant, the two last curls making a lion's tail, held captive by a row of pearls; on the head a plain hat, with crown and brim, shaded with a branch of frivolity and a panache.

* the modern meaning is "a rotating handle for a window", but I don't know if that's relevant; espagnolette is also a type of wool like rateen or shaloon.
** possibly figurative - round trimmings that aren't actual bells 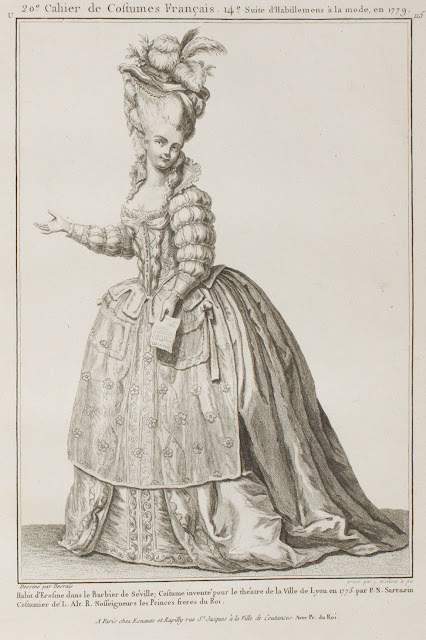