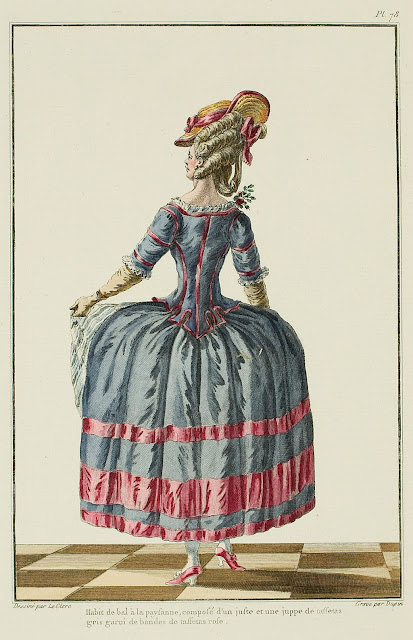 "Peasant" ball dress, composed of a jacket and petticoat of grey taffeta trimmed with bands of pink taffeta. (1779) 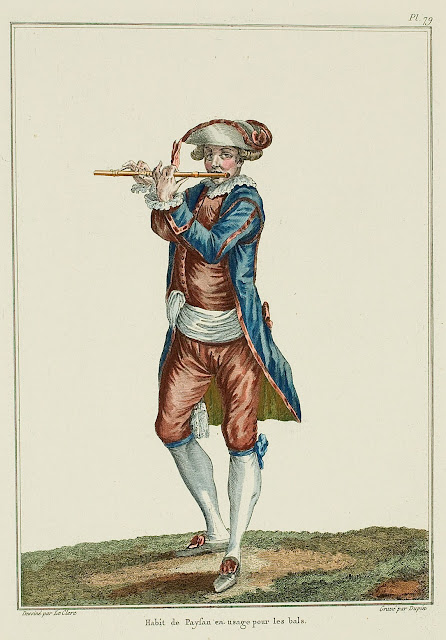 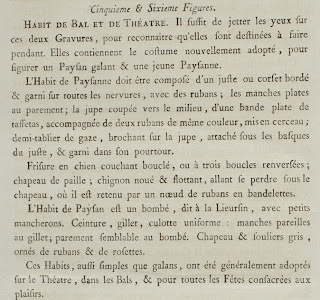 BALL AND THEATER COSTUME.  It suffices to glance at the two Prints to understand that they are intended to hang pendant. They contain the newly-adopted costume for appearing as a gallant Peasant and a young female Peasant.

The female Peasant's dress must be composted of a juste or corset edged and trimmed on all the seams with ribbons; the sleeves with a flat parement; the petticoat cut across the middle with a flat band of taffeta accompanied by two ribbons of the same color, placed in circles [around the petticoat]; half-apron of gauze, spreading over the petticoat, attached under the basques of the juste, and trimmed around the whole edge.

Hair en chien couchant with curls, where there are three reversed curls; straw hat; braided and hanging chignon ending under the hat, where it is held by a bow of ribbons en bandelette.**

The male Peasant's dress is a bombe, called "Lieursin" style, with little mancherons.  Belt, gilet, and breeches match each other: sleeves match the gilet; the parement is similar to the bombe.  Grey hat and shoes, trimmed with ribbons and rosettes.

These outfits, as simple as they are gallant, have been generally adopted by the Theater, for Balls, and for all the Parties consecrated to pleasure.

* I believe at this point that a caraco is a jacket that is either polonaise/francaise, a casaquin is a fitted jacket, and a juste is a lightly boned jacket meant to be worn without stays, but this may change as I find the terms used more in future.
** in a band around the head 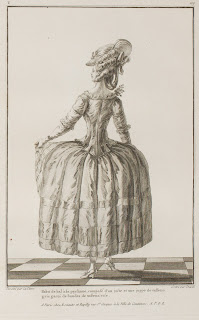 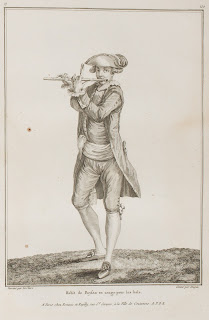