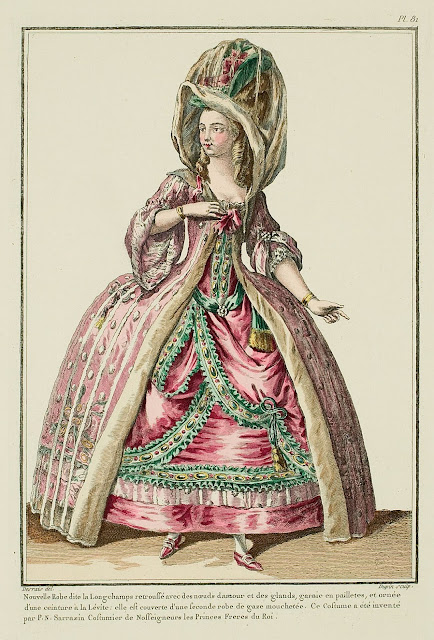 New Gown, called à la Longchamps, pulled up with love-knots and tassels, trimmed with sequins, and decorated with a Levite belt.  It is covered with a second gown of spotted gauze.  This Costume was invented by P. N. Sarrazin, Costumer to Nosseigneurs the Princes, Brothers of the King. (1779) 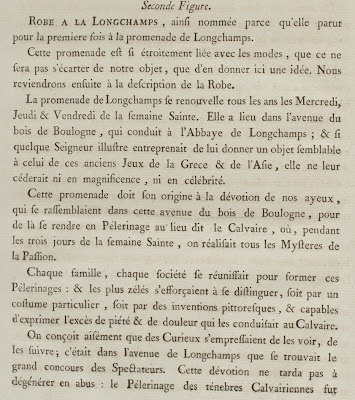 Robe à la Longchamps, so named because it appeared for the first time on the promenade of Longchamps.

That promenade is so closely linked with fashion that it will not be a digression from our subject to here give an idea of it.  We will come back later to the description of the Gown.

The Longchamps promenade renews itself every year on Wednesday, Thursday, and Friday during Holy Week.  It is placed in the avenue of the Bois de Boulogne, which runs to the Abbey of Longchamps; and so some illustrious Seigneur undertook to give it an object like one of the ancient Games of Greece and Asia, it would cede to them neither in magnificence nor in celebrity. 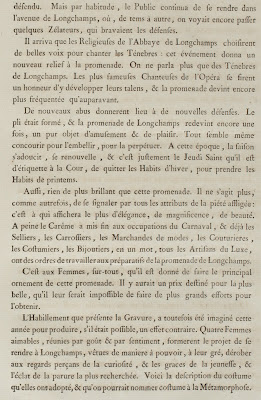 This promenade derives its origin from the devotion of our forefathers, who gathered in the avenue du Bois de Boulogne to make their Pilgrimage to the place called Calvary, where, during these three days in Holy Week, they would realize all the Mysteries of the Passion.

Each family, each society gathered to form these Pilgrimages: and the most zealous endeavored to distinguish themselves with singular costumes and picturesque inventions, capable of expressing the excess of piety and sadness which drove them to Calvary.


One easily conceives that the Curious hastened to see them and follow them; it was in the avenue de Longchamps that the grand assembly of Spectators was found.  This devotion wasn't long in degenerating into overindulgence: the Pilgrimage of gloomy Calvariennes was ended.  But by habit, the Public  will continue to meet in the avenue de Longchamps, where, from time to time, one would see some Zealots pass again, who braved the defenses.

It happened that the Nuns of the Abbey of Longchamps chose beautiful voices to sing the Ténebres:* this event gave a new relief to the promenade.  People spoke only of the Ténébres of Longchamps.  The most famous Opera Singers considered it an honor to develop their talent there, and the promenade became again more frequented than before.

Further disorder gives rise to new defenses.  The habit was formed, and the promenade of Longchamps became once again a pure object of amusement and pleasure.  All seem to contribute to embellishing it, to perpetuating it.  In this epoch, the season mellows, it renews itself, and it is justly on Holy Friday that it is the etiquette of the Court to drop their winter Clothes, to take spring Clothes. 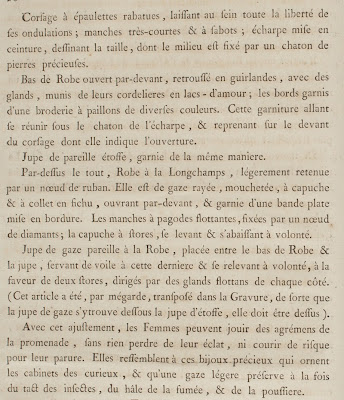 Also, there is nothing more brilliant than this promenade.  There is more, as another time, to report on all the attributes of distressed piety: it is to display the most elegance, magnificence, beauty.  As soon as Lent ended the occupations of Carnaval, already the Saddlers, the Coachbuilders, the Marchandes de modes, the Seamstresses, the Costumers, the Jewelers, and in a word, all the Luxury Artisans, have orders of work for the preparations for the Longchamps promenade.

It is to the Women, above all, that it is given to make the main ornament of this promenade  Unless there were a pre-destined prize for the most beautiful, it would be impossible for them to make greater efforts to obtain it.

The Dress that the Print presents has always been imagined this year to produce, if it were possible, a contrary effect.  Four amiable Women, united by taste and sentiment, will form a project of rendering it at Longchamps, dressed in such a way to be able to, at their discretion, derobe to the piercing gazes of curiosity, both the graces of youth, and the brilliance of the most sought-after parure.  Here is the description of the costume that they have adopted, and which one could call the costume à la Metamorphosis.

Bodice with folded-back shoulders, leaving the chest all the freedom of its undulations; very short sleeves with sabot cuffs; scarf worn as a belt, defining the waist, and the center is fixed with a brooch of precious stones.

Skirt of the Gown open in front, pulled up in garlands with tassels equipped with cordelieres in love-locks; the edges trimmed with embroidery in sequins of many colors.  This trim, coming together under the scarf's brooch and running down the front of the bodice, indicates the opening.

Petticoat of matching fabric, trimmed in the same manner.

Over the whole, Gown à la Longchamps, lightly held together by a ribbon bow.  It is of striped gauze, spotted, with a hood and a fichu collar, open in front, and trimmed with a flat band border.  Hanging sleeves à pagoda, held up by a knot of diamonds; the hood à stores,** put on or down at will.

Gauze petticoat matching the Gown, placed between the bodice of the Gown and the petticoat, serving as a veil to the latter and being pulled up at will, like two awnings, pulled up by hanging tassels on each side.  (This article has been, inadvertently, transposed in the Print so that the gauze petticoat finds itself under the other petticoat: it must be beneath.)

With this adjustment, Women can enjoy the pleasures of the promenade, while losing nothing of their éclat nor running a risk to their parure.  They resemble these precious jewels that adorn curiosity cabinets, and which a light gauze protects at the time from the touch of the infected, from the burn of smoke, and from dust.

* Matins sung in the afternoon on the Wednesday, Thursday, and Friday of Holy Week.
** "awning style" 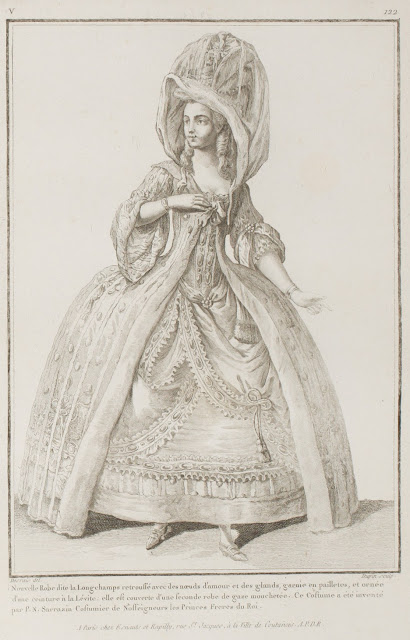