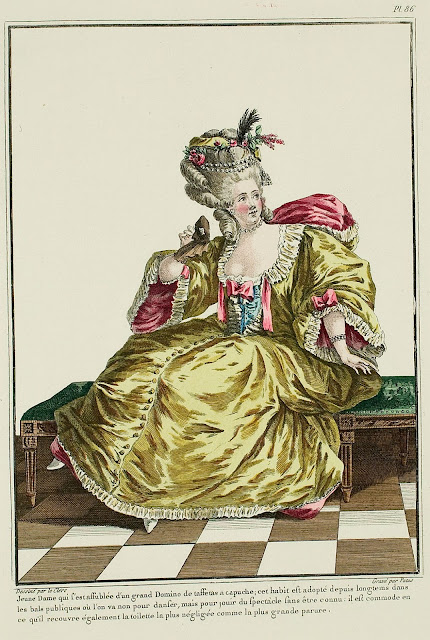 Young Lady who is decked out in a large, hooded, taffeta Domino; this dress was adopted a long time ago at the public balls when one doesn't intend to dance, but to enjoy the spectacle without being recognized: it is convenient in that it covers the most négligé toilette and the grandest parure equally. (1779) 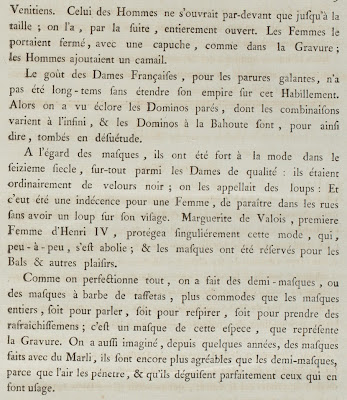 Domino à la bahoute,* or negligé Domino.  This was approximately the Domino, when the French imported it from the Venetians.  That worn by Men only opens to the waist in front; it was, after this, entirely open.  Women wore it closed, with a hood, as in the Print; Men added a cape.

The taste of the French Ladies for gallant parures has not been a long time without extending its empire over this Garment.  Then one saw the trimmed Dominos arise, whose combinations vary to infinity, and the Dominos à la Bahoute are, as it were, fallen into disuse.

With respect to the masks, they were very fashionable in the sixteenth century, especially among the Ladies of quality: they were usually of black velvet, and were called loups.  And it had been an indecency for a Woman to appear in the streets without a loup over her face  Marguerite de Valois, first Wife of Henri IV, protected this fashion singularly, which, little by little, was abolished, and the masks were reserved for Balls and other pleasures.

As it all progresses, the demi-masks, or masks with taffeta beads, were made, more convenient than the full masks for speaking, breathing, and taking refreshments; it is a mask of this type that is shown in the Print.  There has also been imagined, some years ago, masks made with Marli,** they are still more agreeable than the demi-masks, because air penetrates them and they perfectly disguise those who use them.

* a bahut is a small chamber
** a loosely-woven gauze