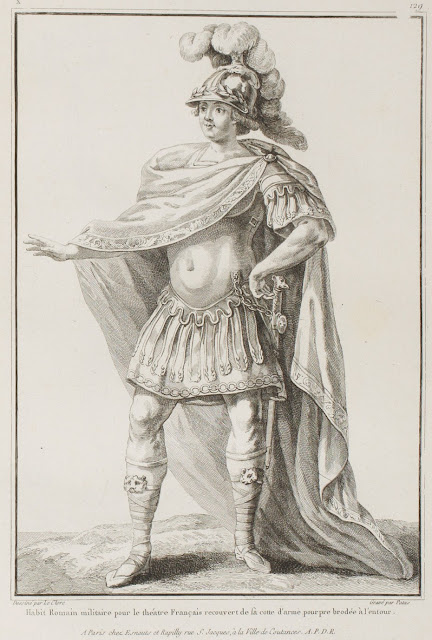 Roman military outfit for the Théatre Français, covered with its purple coat of arms,
embroidered around the edges. (1779)

ROMAN SUIT, for the Theater.  On this Military Outfit, see the Memoirs of the Academy of Inscriptions.  We will observe only that that the Romans not being used to wearing breeches or trousers, and this habit remains still among the Women.

This usage has persisted a long time.  There is even, on this subject, a good passage in the Treatise of the Offices of Cicero, which honors the Comedians, and the decency of the Roman Theater.  Here is the passage:

"The Comedians have carried so far the rules of propriety and decency, that were established by law among them, and that they observe without exception, they never come in the Theater without having under their Clothes something to hide that which should never be seen, so that when their Clothes come open, one sees nothing to wound decency."

We may be permitted to observe that the same law was established among the Dancers, and that in that regard the decency and honesty of our Theaters are not inferior to the Roman Theater, as it was in the time of Cicero.
1770s 18th century Galerie des Modes