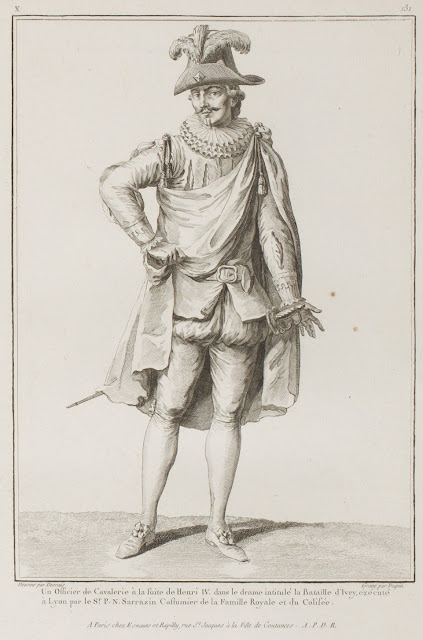 A Cavalry Officer in the time of Henri IV, in the drama titled, The Battle of Ivry, executed at Lyons by Sr P. N. Sarrazin, Costumer to the Royal Family and to the Colisée. (1779)

SPANISH CAVALIER SUIT.  Draped cloak, worn scarf-style, held on the shoulder with pins equipped with tassels.  Yellow bufle, with plain basques, slashed on the chest, and held at the waist with a marrocain belt, buckled.

Shoes tied with a plain and fluffy ribbon, in the color of the slashes of the bufle.  Slashed sleeves with mancherons that are tabbed at the edges, and trimmed with manchettes en fourreau at the bottom.

This Spanish Cavalier is represented while removing his boots; this is why his pantaloons, cut at the garter with puffed aglets, can be seen, and the shoes tied with bows.  The full costume requires boots, trimmed with gilded spurs armed with rowels.
1770s 18th century Galerie des Modes gentlemen