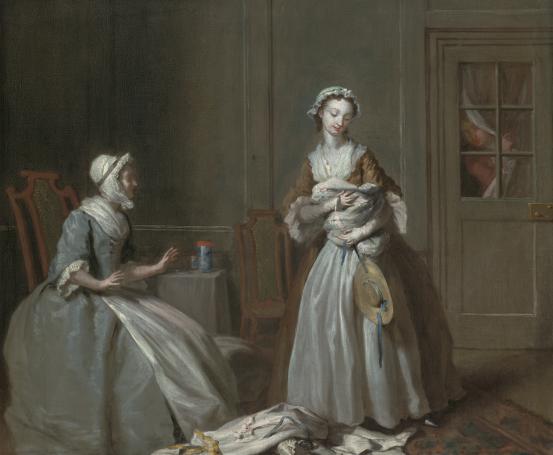 A little recap: in the first few letters, Mr. B was very generous with his late mother's things.


(Letter VI) My master has been very kind since my last; for he has given me a suit of my late lady's clothes, and half a dozen of her shifts, and six fine handkerchiefs, and three of her cambric aprons, and four holland ones.  The clothes are fine silk, and too rich and too good for me, to be sure.

(Letter VII) Since my last, my master gave me more fine things.  He called me up to my late lady's closet, and, pulling out her drawers, he gave me two suits of fine Flanders laced headclothes, three pairs of fine silk shoes, two hardly the worse, and just fit for me (for my lady had a very little foot,) and the other with wrought silver buckles in them, and several ribands and top-knots of all colors; four pair of white fine cotton stockings, and three pair of fine silk ones; and two pair of rich stays.

Pamela finds accepting the stockings without a chaperone present embarrassing, as they're an intimate gift.  This finery is part of what caused Mrs. Jervis to speculate that Pamela would soon be moving to Mr. B's sister Lady Danvers's house as a lady's maid (as I mentioned previously).  He ruins the good impression he's given by making unwelcome advances to her in the summerhouse.


In her next letter, Pamela starts considering running away, but her clothing proves a problem.

(Letter XII) ... but then I had two miles and a half, and a byway, to the town; and being pretty well dressed, I might come to some harm, almost as bad as what I would run away from; ... O how I wished for my grey russet again, and my poor honest dress, with which you fitted me out, (and hard enough too it was for you to do it!) for going to this place, when I was not twelve years old, in my good lady's days!

She's afraid to tell Mrs. Jervis what happened with their employer, and she eventually asks her if they can share a bed because she's "afraid of spirits".  That night, she gives in and explains, but Mrs. Jervis thinks (wrongly, if you can imagine!) Mr. B will start to feel ashamed of himself soon.  However, he keeps creeping around, telling Mrs. Jervis that Pamela's vain and conceited, and accusing Pamela of being a liar and attacking her.

Through various contrivances, Pamela is kept from going home - she wants to finish embroidering the waistcoat, Mr. B says she has to finish it, etc. - but she does try to get on with it.


(Letter XX) Unknown to Mrs. Jervis, I put a project, as I may call it, in practice.  I thought with myself some days ago, Here I shall go home to my poor father and mother, and have nothing on my back that will be fit for my condition; for how should your poor daughter look with a silk night-gown, silken petticoats, cambric head-clothes, fine holland linen, laced shoes that were my lady's; and fine stockings! And how in a little while must these have looked, like old cast-offs, indeed, and I looked so for wearing them! And people would have said, (for poor folks are envious as well as rich,) See there Goody Andrews's daughter, turned home from her fine place! What a tawdry figure she makes! And how well that garb becomes her poor parents' circumstances! - And how would they look upon me, though I to myself, when they should come to be threadbare and worn out? And how should I look, even if I could purchase homespun clothes, to dwindle into them one by one, as I got them? - May be, an old silk gown, and a linsey-woolsey petticoat, and the like. So, thought I, I had better get myself at once equipped in the dress that will become my condition; and though it may look but poor to what I have been used to wear of late days, yet it will serve me, when I am with you, for a good holiday and Sunday suit, and what, by a blessing on my industry, I may, perhaps, make shift to keep up to.

So, as I was saying, unknown to any body, I bought of farmer Nichols's wife and daughters a good sad-coloured stuff, of their own spinning, enough to make me a gown and two petticoats; and I made robing and facings of a pretty bit of printed calico I had by me.

I had a pretty good camblet quilted coat, that I thought might do tolerably well; and I bought two flannel undercoats; not so good as my swanskin and fine linen ones, but what will keep me warm, if any neighbor should get me to go out to help 'em to milk, now and then, as sometimes I used to do formerly; for I am resolved to do all your good neighbours what kindness I can; and hope to make myself as much beloved about you, as I am here.

I got some pretty good Scotch cloth, and made me, of mornings and nights, when nobody saw me, two shifts; and I have enough left for two shirts, and two shifts, for you my dear father and mother.  When I come home, I'll make them for you, and desire your acceptance.

Then I bought of a pedlar, two pretty enough round-eared caps, a little straw-hat, and a pair of knit mittens, turned up with white calico; and two pair of ordinary blue worsted hose, that make a smartish appearance, with white clocks, I'll assure you; and two yards of black riband for my shift sleeves, and to serve as a necklace; and when I had 'em all come home, I went and looked upon them once in two hours, for two days together; ...

And how in a little while must these have looked, like old cast-offs, indeed, and I looked so for wearing them! - If Pamela comes home in silks and cambrics, it will be assumed that she has ruined herself to get them.  Such a situation can be seen in The History of Tom Jones, when Tom gives Molly a nice silk dress.

and two pair of ordinary blue worsted hose, that make a smartish appearance, with white clocks, I'll assure you - At the same time that she's trying not to dress above her station, however, she is still concerned with fashion and looking smart.


After a while, she changes into her new clothes to get used to not dressing so finely.


(Letter XXIV) There I tricked myself up as well as I could in my new garb, and put on my round-eared ordinary cap; but with a green knot, however, and my homespun gown and petticoat, and plain leather shoes; but yet they are what they call Spanish leather; and my ordinary hose, ordinary I mean to what I have been lately used to; though I shall think good yarn may do very well for every day, when I come home.  A  plain muslin tucker I put on, and my black silk necklace, instead of the French necklace my lady gave me; and put the ear-rings out of my ears; and when I was quite equipped, I took my straw hat in my hand, with its two blue strings, and looked about me in the glass, as proud as any thing - To say truth, I never liked myself so well in my life.


The scene depicted here is from Letter XXIX: 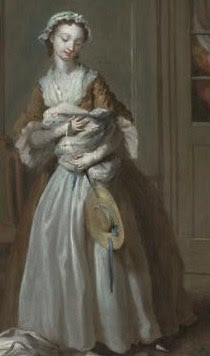 The dress described earlier is the on in which Pamela is depicted in the painting, clutching her third bundle.  (See, we got there eventually.)  Her "sad-coloured" gown and petticoat are a medium brown wool stuff; her kerchief is white muslin (while painted or printed calicos were expensive fabrics in the 1740s, plain muslin seems to have been more commonplace).  The artist did not depict her calico facings and robings, unfortunately, or her black silk necklace.  However, he did add (probably linen) mitts. 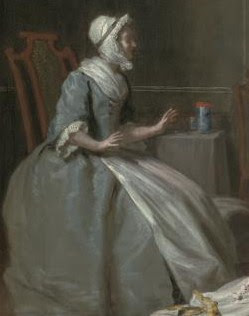 Mrs. Jervis is wearing a grey silk taffeta gown, with wide sleeves and wing cuffs.  Her own kerchief seems to be more tucked inside her neckline, and her cap has lappets that meet under her chin.  She and Pamela are wearing aprons of the same level of informality: meant for work, not show.