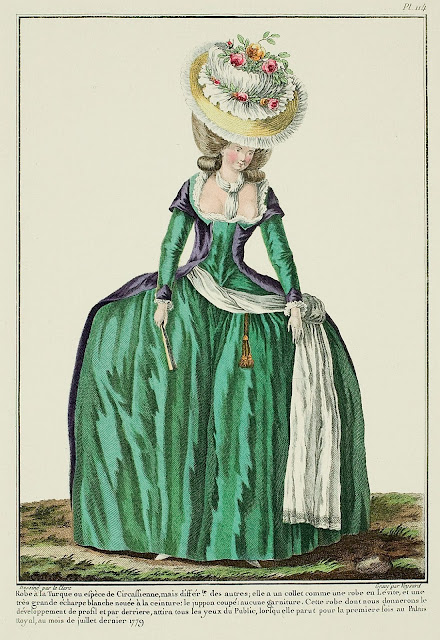 Robe à la Turque or type of Circassienne, but different than the others; it has a collar like a Lévite, and a very large white scarf knotted at the waist: the petticoat is coupé: no trimming.  This gown, which we will show in profile and from the back, attracted all the eyes of the Public, when it was seen for the first time at the Palais Royal in the month of last July 1779. (1779) 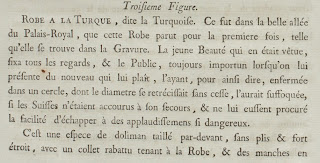 Robe à la Turque, called the Turquoise.  It was in the beautiful path of the Palais-Royal that this Gown was seen for the first time, thus is it shown in the Print.  The young Beauty who was dressed in it held all gazes, and the Public, always intrusive when presented with something new that pleases it, having, so to speak, enclosed her in a circle with a diameter that shrank without ceasing, would have suffocated her if the Swiss Guards had not hastened to her aid, and had not given her the facility to escape from this so-dangerous acclaim.

It is a type of dolman that is fitted in front, without pleats and very narrow, with a folded-back collar holding to the Gown, and funnel-shaped sleeves.  The underbodice is separated from the petticoat, and pleated like the fourreaux à l'Anglaise.*

Draped belt, knotted on the side, around the hip, and allowing the waist to be seen in all its lightness.

We will have occasion to show this pretty Gown in the first two Prints of the thirtieth Book.

* Chatty footnote: I've been trying to figure out what exactly is meant by "fourreau" and how back fitting-pleats were described for a while, because I'm not 100% sure that they're always the same thing.  In this case, though, it does kind of sound like the underbodice is fitted with sewn-down pleats in back.
** en tapé relates to flattened, dried fruit; en champignon is "mushroom-style" 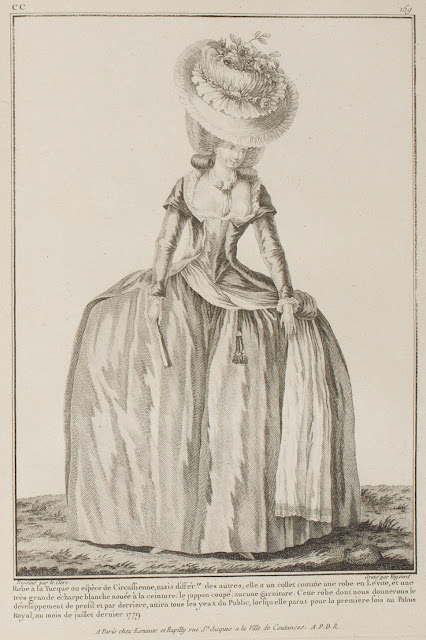