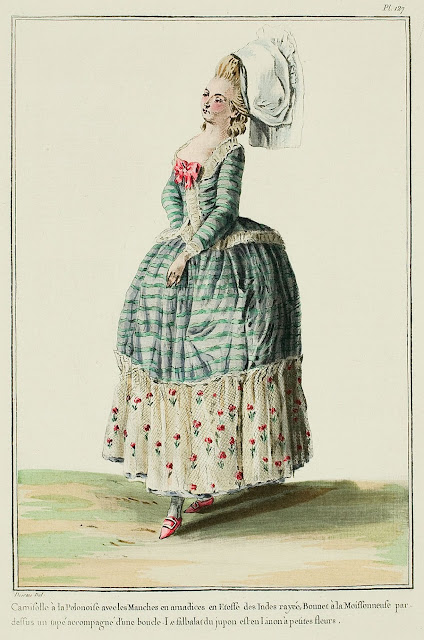 Camisole à la Polonaise with amadis sleeves, in striped Indian stuff.  Reaper's cap over a tapé accompanied by a curl.  The flounce of the petticoat is in Linen with little flowers. (1780)

Camisole, or bedgown à la Polonaise, serving as deshabillé.  See on this subject what will be said later, in describing the sixth Figure of the thirtieth Book.  We will only observe here, the long and pointed slippers, which, in these recent times, are retaken in favor. 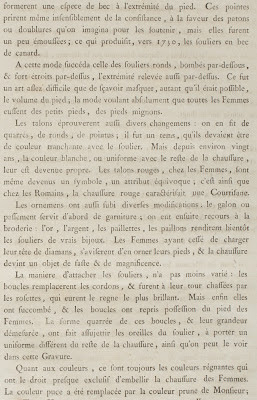 This fashion had the greatest vogue at the beginning of the eighteenth century.  The shoes lengthen, to the point that they form a type of beak at the end of the foot.  These points took even insensibly to consistency, to the favor of the inner soles or linings that were made to support them, but they were a little blunt; which produced, around 1730, duck-bill shoes.

To this fashion succeeded that of round shoes, cambered underneath, and very narrow above, the end also raised underneath.  That made a rather difficult art of knowing how to conceal, as far as it was possible, the size of the foot; fashion absolutely wanting all Women to have little feet, cute feet.

Heels also experienced diverse changes: they were made squared, round, pointed; there was a time that they had to be of a contrasting color to the shoe.  But since about twenty years ago, white, or a color uniform to the rest of the shoe, became proper for them.  Red heels, among Women, are even become a symbol, an ambiguous attribute; it is thus among the Romans, that the red heel characterizes a Courtesan.

The ornaments also underwent diverse modifications: the braid or passement served first as trim; then one had recourse to embroidery: gold, silver, sequins, large sequins soon made shoes look like real jewels.  Women having ceased to put diamonds on their heads, began to ornament their feet with them, and the shoe became an object of splendor and magnificence.

The manner of attaching the shoes is not less varied: buckles replaced cords, and were in their turn chased by rosettes, which had the most brilliant reign.  But at last they have succumbed, and buckles took possessions of Women's feet again.  The squared form of these buckles, and their vast size, were made to steady the latchets, to wear a uniform different from the rest of the shoe, as one can see in this print.

About colors, there are always reigning colors which have almost the exclusive right to embellish Women's shoes.  The color puce was replaced by the color "Monsieur's prune"; that has disappeared, and left the field free for pale blue; "goose droppings" has come at last, and at the moment we are writing, the color "Paris mud" begins to become the favorite color.

The last fashion consists of wearing neither buckles nor rosettes, and these are the shoes à la Lévite which have effected this revolution.  We have given the description of them in one of the preceding books. 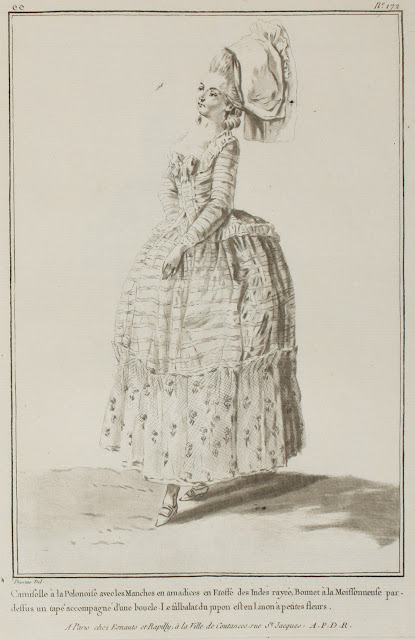