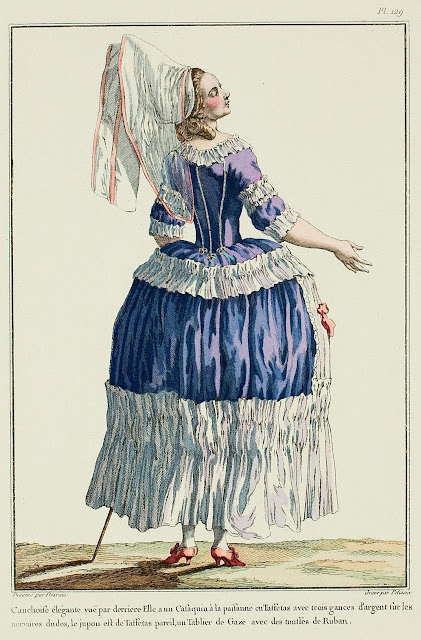 Elegant Cauchoise seen from the back.  She has a peasant Casaquin in Taffeta with three silver gances on the back seams, the petticoat is of matching Taffeta, a Gauze Apron with ribbon tufts. (1780) 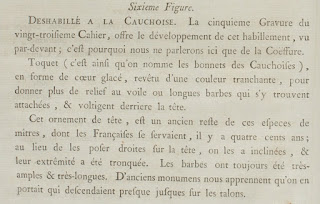 DESHABILLÉ A LA CAUCHOISE.  The fifth Plate of the twenty-third Book offers the view of this dress, seen from the front; this is why we only speak here of the Coiffure.

Toquet (which is what the Cauchoise caps are called) in the shape of an iced heart, covered with a contrasting color, to give more relief to the veil or long lappets which are found attached, and flutter behind the head.

This head ornament is an ancient remnant of these types of miters which Frenchwomen wore for four centuries; instead of putting them straight on the head, they were leaned, and their end was truncated.  The lappets have always been very full and very long.  From ancient monuments we learn that ones which descended almost to the heels were worn.

The Cauchoises are the only women in France who have preserved this antique costume, with some modifications; several Parisian women have wanted to revive it in these recent times, but their attempts have not been crowned with success. 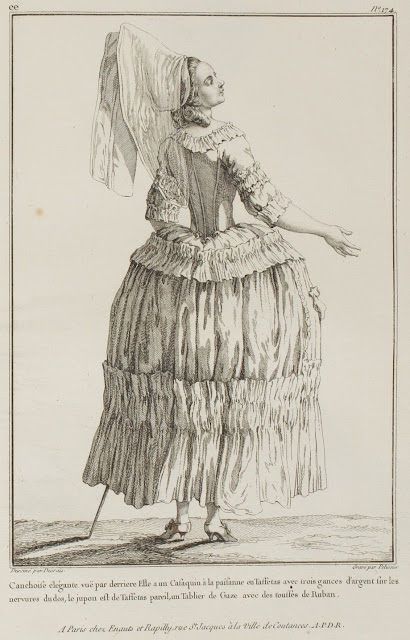