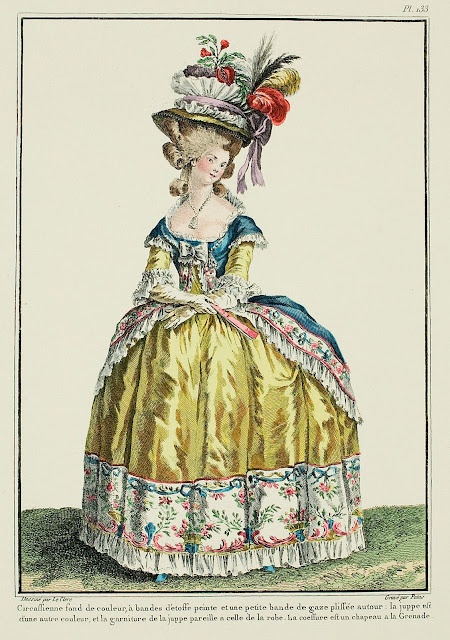 Circassienne with a colored ground, with bands of painted fabric and a little band of pleated gauze around it; the petticoat is of another color, and the trim of the petticoat matches that of the gown.
The coiffure is a hat à la Grenade. (1780)

THE GRENADIERE: type of Circassienne, which owes its name to the taking of the Isle of Grenada from the English by the Comte d'Estaing. 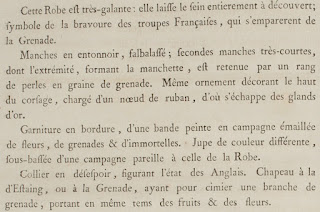 This Gown is very galant: it leaves the chest entirely uncovered; a symbol of the bravery of the French troops, who seized Grenada.

Funnel sleeves, flounced; second very short sleeves, whose edges, forming the manchette, are held in with a row of pomegranate seed pearls.*  The same ornament decorating the top of the bodice, charged with a ribbon knot, from which escapes gold tassels.

Trimmed in borders, with a painted band, the field dotted with flowers, pomegranates, and helichrysum.  Petticoat of a different color, sous-bassée with a field matching that of the Gown.

Désespoir necklace, given the state of the Anglais.  Hat à la d'Estaing, or à la Grenade, having for a crest a branch of pomegranate, holding one of the fruits and one of the flowers.

* I think the "very short sleeves", which are the yellow undersleeves, are considered "very short" in comparison to the more common long or just-below-the-elbow sleeves - these seem to not quite reach the elbow.  I'm not sure about the pomegranate seed pearls. 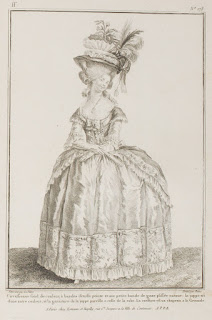