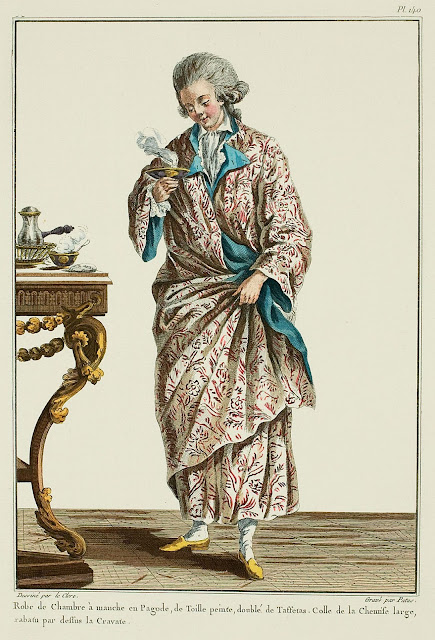 Dressing Gown with sleeves en Pagode, of painted Linen, lined with Taffeta.
Wide Shirt collar, turned down over the Cravat. (1780) 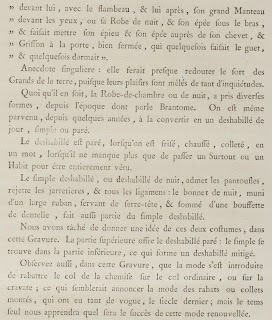 ROBE DE CHAMBRE.  This is Men's deshabillé: it also called a Nightgown.  This is what we learn from Brantome, in speaking of a certain King, "who never went in good fortune, was in his secret galleries at Saint-Germain, Blois, and Fontainebleau, that he did not have his favorite valet-de-chambre, called Griffon, who carried his spear before him, with the torch, and after him, his great Cloak in front of his eyes, or his Nightgown, and his sword under his arm, and making to place his spear and his sword near his bedside, and Griffon to the door, well closed, who sometimes was the lookout, and sometimes slept."

A singular anecdote: one would almost dread the lot of the Great People of the land, since their pleasures are mixed with as many concerns.

At any rate, the Dressing gown or nightgown has taken diverse forms, since the epoch of which Brantome speaks.  It has even managed to be accepted, for some years, as a day deshabillé, simple or paré.

The deshabillé is paré when it is curled, shod, collared, in a word, when it lacks nothing but an Overcoat or a Coat to be entirely dressed.*

We have tried to give an idea of these two costumes in this print.  The upper part offers the deshabillé paré, while the simple type is found in the lower part, which together form a mitigated deshbillé.

Observe also, in this Print, that the fashion is introduced of turning down the collar of the shirt over the ordinary collar, or on the cravat; which seems to announce the fashion of rabats or mounted collars, which had such a vogue in the last century; but only time will tell what will be the success of this renewed fashion.

* That is, when the person wearing the deshabillé has had his hair dressed and is wearing shoes and a cravat; paré could be translated as "full".

** Ie, anything that must be tied? 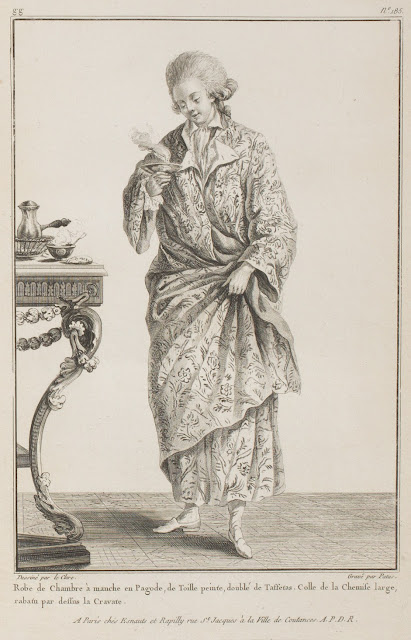