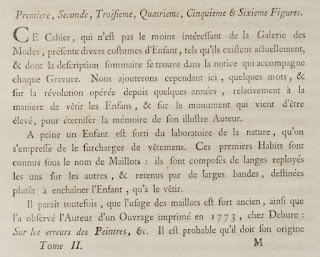 This Book, which is no less interesting than the Galerie des Modes, presents diverse clothing for Children, which actually exist and whose summary descriptions are found in the captions which accompany each Print.  We add here, however, some words, and on the revolution carried out over several years, relative to the manner of dressing Children, and on the monument which was just raised to eternize the memory of its illustrious Author. 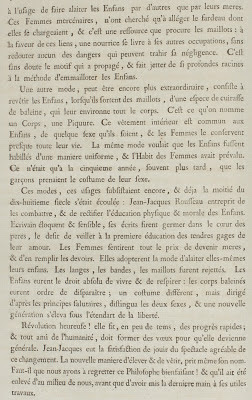 A Child is scarcely out of the laboratory of nature when one hastens to overload it with clothing.  These first Garments are known as Suits: they are composed of swaddling cloths folded over each other, and held on with wide bands, intended rather to fetter the Child than to clothe it.

However, it seems that the usage of these suits is very ancient, as observed by the Author of a Work printed in 1773 by Debure: [Observations historiques et critiques] sur les erreurs des peintres, &c.  It is probable that it owes its origin to the practice of Infants being fed by women other than their mothers.  These mercenary Women have only sought to alleviate the burden with which they were charged, and it is a resource that procures the suits: thanks to these bonds, a nurse frees herself for her other occupations, without fear of any of the dangers which could betray her negligence.  This is without a doubt the cause which has propagated and given such deep roots to the method of suiting Infants. 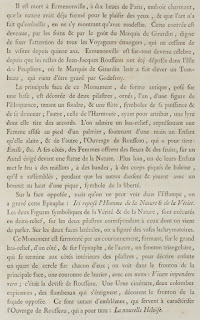 Another fashion, perhaps still more extraordinary, for dressing Children when they are out of their suits is a type of boned cuirasse around their body.  This is what is called Stays, a Piqure.  This interior garment is common to Children of both sexes, and Women continue to wear them all their lives.  The same fashion wants Children to be dressed in an uniform manner, and Women's Dress has prevailed.  It is only in the fifth year, often later, that boys take the costume of their sex.

These fashions, these practices still remained, and half of the eighteenth century had already elapsed: Jean-Jacques Rousseau began to combat them, and rectify the physical and moral education of Children.  An eloquent and sensible writer, his writings germinated in fathers' hearts, the desire to ensure the first education of the tender pledges of their love.  Women felt all the price of becoming mothers, and of fulfilling their requirements.  They adopted the fashion of breastfeeding their own children.  The blankets, the bands, the suits were rejected.  Children had the absolute right to live and breathe: stays were ordered to disappear; a costume that is different, but directed on salutary principles, distinguished the two sexes, and a new generation was raised under the banner of liberty. 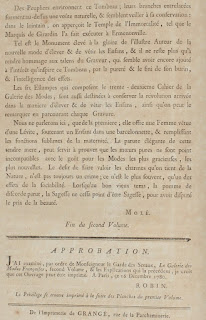 Happy revolution! it made, in a little time, rapid progress; and every friend of humanity must wish that it becomes general.  Jean-Jacques had the satisfaction of making the agreeable spectacle of this change.  The new manner of raising and dressing even took his name.  We must miss this beneficent Philosopher! and that he has been raised from our midst before having put the last hand to his useful works.

He died in Ermenonville, ten leagues from Paris, a charming place that nature had already formed to the eyes' pleasure, that art could only embellish in only showing it with modesty.  This country has become, through the attentions and taste of the Marquis de Girardin, worthy of the attention of all foreign Travelers, who have not ceased to visit in for fifteen years.  Ermenonville has become above all famous, since the remains of Jean-Jacques Rousseau were deposited on the Isle of Poplars, where the Marquis de Girardin raised a Tomb which was just engraved by Godefroy.

The principal face of this Monument, in an antique form, positioned on a base, is decorated with two pilasters, one decorated with a figure of Eloquence holding lightning and a flute, symbols of power and sweetness; the other is that of Harmony, having for an attribute a lyre on which she draws chords.  One admires a bas relief representing a Woman sitting at the foot of a palm tree, supporting in one hand a Child which she breastfeeds, and in the other the Work of Rousseau, which is titled Émile, &c.  Next to them, Women offer flowers and fruits, on an Altar erected in front of a statue of Nature.  Further, one of their Children is putting suits, bands, stays which he has gathered in a fire, while the others dance and play with a cap on a pike, a symbol of liberty.

On the opposite face, which cannot be seen in the Print, this Epitaph is engraved: Here lies the Man of Nature and Truth.  The two Figures symbolizing Truth and Nature are executed in demi-relief on the two pilasters corresponding to those which were just spoken of.  On the two lateral faces, lachrymatories were drawn.

This Monument is surmounted by a crown, forming, on the great bas-relief, on one side, and on the epitaph, of the other, a triangular pediment which ends on the inner sides of the pilasters, to describe them a quarter circle over each of them; one sees in the pediment of the principal face a laurel wreath with the words: Vitam impendere vero [To devote one's life to truth]; this was Rousseau's motto.  A cinerary Urn, two dying doves, extinguished torches decorate the pediment of the opposing façade.  These are many emblems which serve to character the Work of Rousseau which is titled: The New Heloise.

Poplars surround this Tomb; their interlaced branches form a natural vault above, and seem to protect it: in the distance, the Temple of Immortality can be seen, which the Marquis de Girardin had made at Ermenonville.

Such is the Monument raised to the glory of the illustrious Author of the new method of raising and dressing Children, and it remains only to render homage to the talents of the Printer, who seems to have added to the  interest inspired by this Tomb, by the purity and the finish of its chisel, and the intelligence of the effects.

The six Print which compose the thirty-second Book of the Galerie des Modes are also intended to preserve the revolution that arrived in the manner of raising and dressing Children, as can be observed in browsing each Print.

We speak here of the first; it offers a Woman dressed in a Lévite, holding a Child in a cradle and fulfilling the sublime functions of motherhood.  The elegant parure of this tender mother can prove that pure morals are not incompatible with a taste for the most graceful and newest Fashions.  The desire to assert the charms that were from Nature is not always a crime; it is often one of the effects of sociability.  When in the good old days, the apple of discord appeared, Wisdom never ceased to be Wisdom, to have disputed the price of beauty.


End of the second Volume.

I have examined, by order of Monseigneur the Keeper of the Seals, La Galerie des Modes Françaises, second Volume, and the Explanations which precede it; I believe that this Work may be printed.  In Paris, this 16 December 1780.


The Privilege is found printed following the Plates of the first Volume.