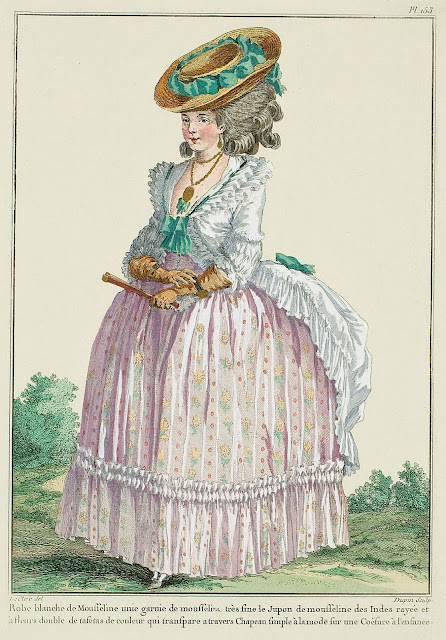 White gown of plain Muslin trimmed with very fine muslin; the Petticoat of striped and flowered Indian muslin lined with colored taffeta which can be seen through [the muslin].  Simple fashionable hat on a coiffure à l'enfance. (1780) 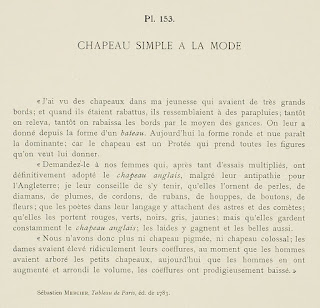 "I saw hats in my youth which had very large brims; and when they were turned up, they resembled umbrellas; sometimes they were pulled up, sometimes the brims were reduced by using gances.  They were then given the form of a boat.  Today the round and bare form seems to be dominant; for the hat is a Proteus which takes all the shapes that one wants to give it.

"Ask our women who, after so many attempts, have definitively adopted the English hat, despite their antipathy for England; I counsel them to keep them, to ornament them with pearls, diamonds, plumes, cords, ribbons, tassels, buttons, flowers; that the poets in their language should attach stars and comets to them; that women wear them in red, green, black, grey, yellow; but that they keep the English hat; homely women as well as beauties may wear them.

"We have therefore neither pygmy hats nor colossal hats; ladies had raised their coiffures ridiculously, at the moment that men had sported little hats; now that men have augmented them and rounded the volume, coiffures have lowered prodigiously."