April 28, 2013
Yesterday evening, I went on an unusual date to "Expo 1920s", a program put on by undergraduates at the Russell Sage's Women's Studies Center and the Rensselaer County Historical Society.  (Visiting that campus in Troy makes me almost wish I'd gone to a private college!  SO BEAUTIFUL.) 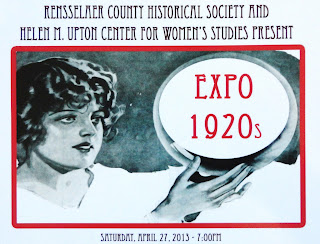 I had no idea what to expect, as there were only very short blurbs online giving basic information.  When we came in it was just starting, taking the form of a kind of runway show, with a student talking from the perspective of a woman from the 1920s to introduce objects (dresses on mannequins, hats on stands, a gramophone, a toaster, etc.), which were wheeled down the aisle to the strains of popular period music.  After the show was over, the three students who'd worked on the project sat on the stage with the curator of the RCHS and took questions.  It was an enjoyable way to spend the evening, although I would have liked it if there had been more discussion of the gradual changes through the 1900s and 1910s, rather than the slightly simplified "transition ... from the Victorian era to the Flapper era" (text from the program), as though the years in between didn't have their own identities. 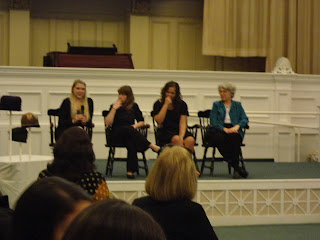 Afterward, we walked around to look at the objects more closely, and I spoke to the curator - I'm pretty sure I know of the local places that have 18th century clothing in their collections, since it's rare, but I'm trying to gauge where to go for early 19th century dress once I finish up with this first book.  Of course, I took some halfway decent shots of the three dresses: 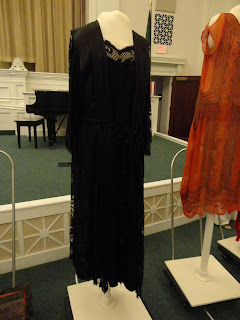 RCHS 1961.98
The cut of this dress is slightly similar to one from the Great, Strange, and Rarely Seen exhibition, with those long satin panels down the front and a frothy underdress.   Dating to about 1922, I think, because of the fussiness (several layers of closures) and the waist being placed at the high hip. 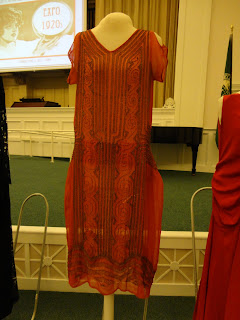 RCHS 1984.20.44
When it was being taken down the runway I thought this was just your average gorgeous beaded dress, but with a confusing silhouette (the hip fullness indicates the earlier half of the decade, but that length couldn't be earlier than late 1925) but once I got closer I noticed the messy alteration at the waistline.  The original seamstress from 1923 or 1924 was very skilled, but whoever took it up was nowhere near as good.  The bottom of the dress is beaded in a scalloped pattern and used the selvage, so it had to be raised in the middle, disrupting the beading. 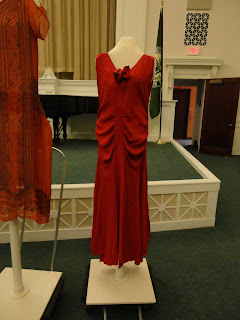 In unrelated news, it suddenly occurred to me that it would be a good idea to run a series of posts on my Tumblr analyzing the applied trim on dresses from the 1810s and 1820s.  I expect Tumblr will be less than enthusiastic about the lengthy ramblings building up in my queue, but if you're interested in sewing pretty gowns from this era you might want to follow along.  Zooming in lets you see all kinds of details, and I think my explanations are detailed enough to help someone reproduce them.
1920s review