May 13, 2013
I don't entirely understand this section, nor the next - the 34th, 38th, and 39th books are listed as having second versions that fit in, date-wise, after the 40th.  But as they are here, I will still show them.  (Except the ones which I can't find anywhere, such as the first in this section.) 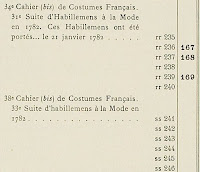 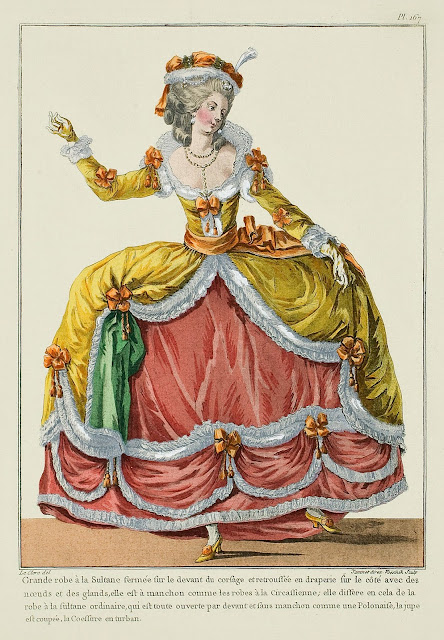 Full robe a la Sultane, closed in the front of the bodice and pulled up in drapery on the side with bows and tassels; it has mancherons* like the Circassiennes; it differs from the ordinary robe a la sultane, which is open in front and without mancherons* like a Polonaise, the petticoat is coupé, the Coiffure is a turban. (1782) 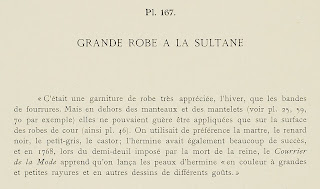 "There was a very appreciated gown trimming in the winter, of fur bands.  But outside of cloaks and mantelets (see plates 25, 59, 70, for example), they could hardly be applied on the surface of court gowns (plate 46).  The preference was for marten, black fox; squirrel, beaver; ermine had as much success, and in 1768, for the half-mourning imposed for the death of the queen, the Courrier de la Mode taught that one used ermine skins 'colored with large and small stripes and in other patterns for different tastes'."


*Technically, the text says "manchon", which is a muff, so I believe this is a typo.