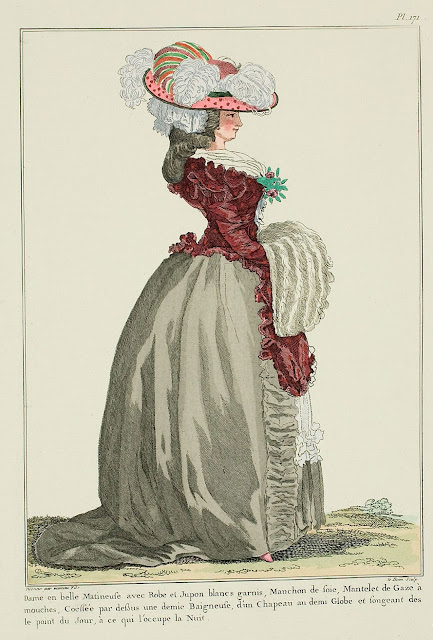 Lady in beautiful Morning dress, with white and trimmed Gown and Petticoat, silk Muff, spotted Gauze Mantelet, Coiffed over a half-Baigneuse with a demi-Globe hat and thinking of the end of the Day, to that which occupies the Night. (1784) 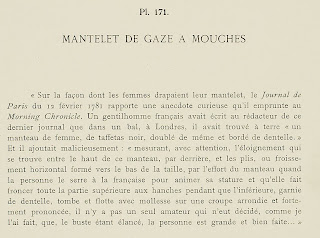 "On the method by which women draped their mantelets, the Journal de Paris of February 12 1781 reports a curious anecdote, which it took from the Morning Chronicle.  A French gentleman had written to the editor of the latter newspaper that at a ball, in London, he had found on land 'a woman's cloak, of black taffeta, lined with the same and edged with lace.'  And he added maliciously: 'measuring, carefully, the length between the top of the cloak, in the back, and the pleats or horizontal crumpling formed around the bottom of the waist, by the force of the cloak when the person tightens it in the French manner to elevate her stature and when she gathers the whole upper part at the hips while the lower part, trimmed with lace, falls and floats with softness over a rounded and strongly pronounced croupe*, there is not a single admirer who hadn't decided, as I made it, that the bust being soaring, the person is tall and well made ..."