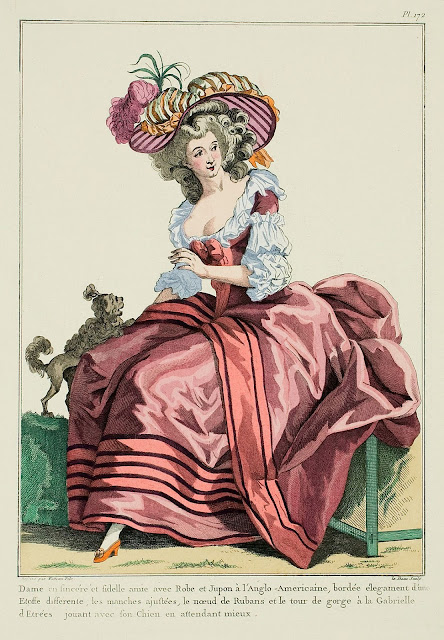 Lady, a sincere and faithful friend, with a Gown and Petticoat à l'Anglo-Americaine,* edged elegantly with a different fabric, fitted sleeves, Ribbon bow and tour-de-gorge à la Gabrielle d'Etrées,** playing with her Dog while waiting for better. (1784) 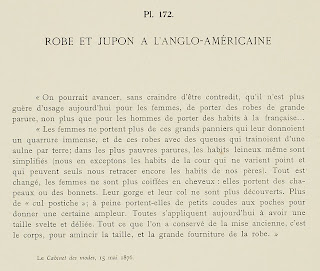 "One could advance, without fear of being contradicted, that it is hardly usual today for women to wear the full parure than for men to wear suits à la française ...

"Women no longer wear the full hoops which gave them an immense breadth, or those gowns with trains that trail for an ell on the ground: in the poorest parures, even wool suits are simplified (we make an exception for court suits which never vary and which can only remind us still of the suits of our fathers).  Everything is changed, women are no longer coiffed en cheveux: they wear hats or caps.  Their throats and necks are no longer uncovered.  No more the 'false rump'; they hardly wear little coudes† with pockets to give a certain fullness.  All apply today to have a svelte and nimble waist.  All that has been conserved of the former look are the stays, to narrow the waist, and the grand trimmings of the gown."

* Americans of the former English colonies
** Gabrielle d'Estrées (1573-1599) was a mistress of Henri IV.  Apart from the famous nipple-pinching portrait, she was usually painted with a fashionable while ruff, which the tour-de-gorge is presumably supposed to resemble.
† literally "elbows", probably referring to a very small hip roll or tournure
‡ Originally this was "1876", but from the text it sounds like there is an error in the printing.