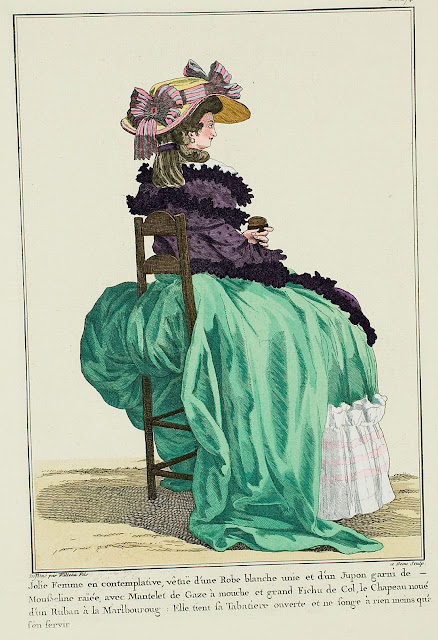 Pretty Woman in contemplation, dressed in a solid white Gown and a Petticoat trimmed with striped Muslin, with a spotted Gauze Mantelet with a large Fichu Collar.  The Hat knotted with a Marlborough Ribbon.*  She holds her open Snuffbox and thinks of nothing that doesn't serve her. (1784) 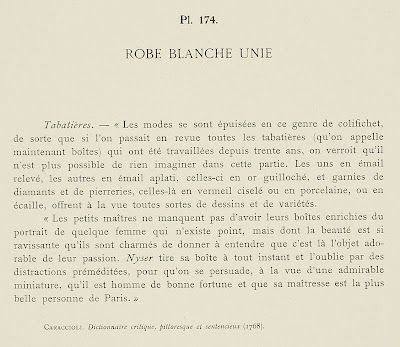 Snuffboxes. - "Fashions are exhausted in the area of trinkets, of the type that if on passed in review all the snuffboxes (that are now called boxes) which have been worked for thirty years, one would see that it is no longer possible to imagine anything in this part.  Those in raised enamel, the others in flat enamel, those in guilloché gold, and trimmed with diamonds and precious stones, those in chased vermeil or porcelain, or in scales, offer to the eye all sorts of designs and varieties.

"The little masters do not fail to have their boxes enriched with a portrait of some woman who never existed, but whose beauty is so ravishing that they are charmed to suggest that this is the adorable object of their passion.  Nyser** takes out his box at every instant and forgets to close it, by premeditated distractions, one is persuaded, to show an admirable miniature, and that he is a lucky man and that his mistress is the most beautiful woman in Paris."

* A song was written about John Churchill, 1st Duke of Marlborough, after his military victories, which was supposedly sung by the Dauphin's nurse.  It was then said to be picked up by Marie Antoinette, making it instantly popular among the haut monde, which then led to various fashions being labeled à la Marlborough.