May 03, 2013
[The 38th and 39th books are coiffures, and are not in the Bunka Gakuen text.  I believe I will come back again and do all of the hat/hairstyle plates after I finish with the dress plates.] 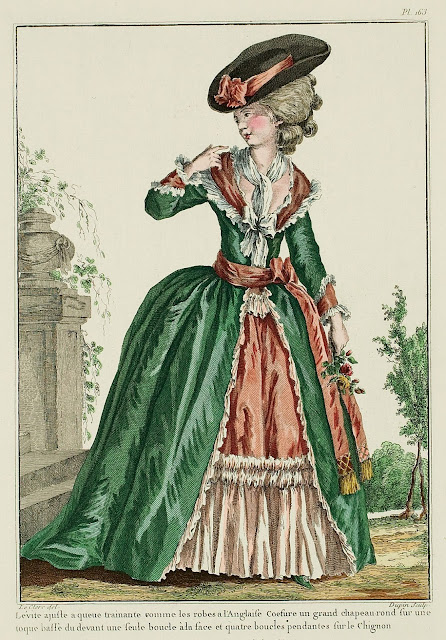 Adjusted lévite, trained like the robes à l'Anglaise.  Coiffure a large round hat on a toque that is low in front, a single curl in front and four hanging on the Chignon. (1782) 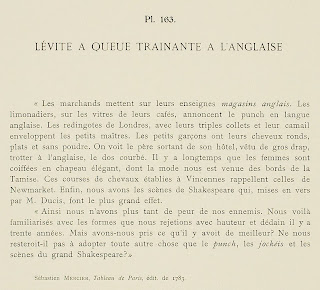 "Merchants put up on their signs English shops.  The lemonade sellers, on the windows of their cafés, announce their punch in the English language.  London redingotes, with their triple collars and their capes which envelop the little masters.  Little boys have their hair round, flat, and without powder.  The father is seen exiting his hotel, dressed in thick wool, trotting in English fashion, the back curved.  It has been a long time that women have been coiffed with elegant hats, whose fashion came to us from the banks of the Thames.  Those racetracks established at Vincennes recall those at Newmarket.  Finally, we have scenes from Shakespeare which, put into verse by M. Ducis, made the greatest effect.

"Thus we no longer fear our enemies.  Here we are familiar with the forms that we rejected with hauteur and disdain thirty years ago.  But have we taken what was best?  Does it not remain to us to adopt every other thing than punch, jockeys, and the scenes of the great Shakespeare?"