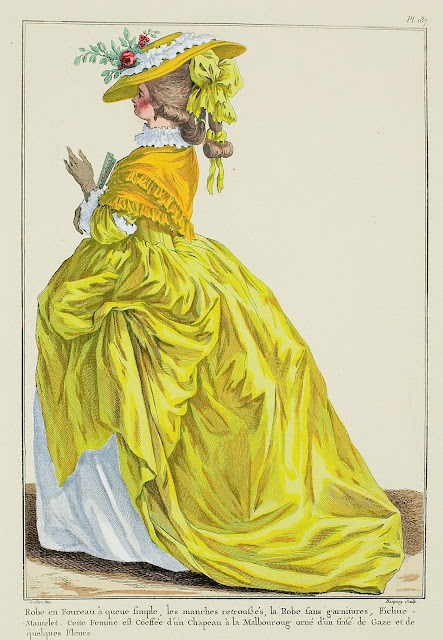 Gown en Fourreau with simple train, the sleeves pulled up, the Gown without trim, Fichu-Mantelet.  This Woman is coiffed with a Marlborough Hat trimmed with a Gauze frill and some Flowers. (1784) 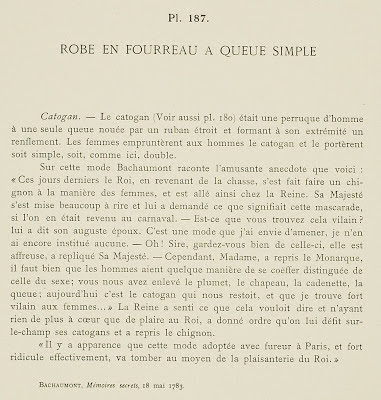 Cadogan. - The cadogan (see also plate 180) was a man's wig with a single queue tied with a narrow ribbon and forming a bulge at its end.  Women borrowed the cadogan from men and wore it whether simple or, as here, double.

On this fashion Bachaumont recounted an amusing anecdote: "Lately the King, on coming back from the hunt, put on a chignon in the manner of women, and went thus to the Queen's apartments.  Her Majesty was taken very much in laughter and she asked him what was the meaning of this masquerade, if he had come back from a carnival.  -Do you find it ugly? said her august spouse.  It is a fashion that I want to bring out, I have never before instituted any.  -Oh! Sire, watch yourself here, it is frightful, replied Her Majesty.  -Nevertheless, Madame, replied the Monarch, the men must have some manner of dressing their hair to distinguish their sex: you have taken from us the plume, the hat, the cadenette,* the queue: today, it is the cadogan that remains to us, and that I find very ugly on women ..." The Queen heard what he wanted to say and having nothing nearer to her heart than the pleasure of the King, gave an order that everyone take them off on the spot and return to the chignon.

"Thus it appears that this fashion adopted with a fury in Paris, and very ridiculous indeed, will fall by means of the pleasantry of the King."