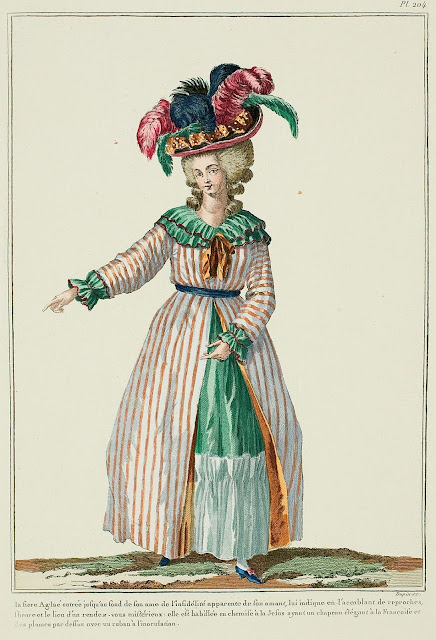 The proud Aglaé outraged to the bottom of her soul at the apparent infidelity of her lover, indicating it to him by overwhelming him with reproaches, the time and the place of a mysterious rendez-vous: she is dressed in a chemise à la Jesus, having an elegant hat à la Française, and plumes above it with a ribbon à l'inoculation. (1785) 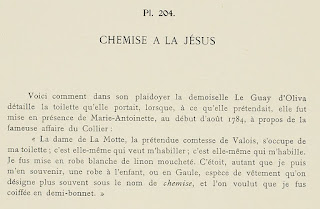 Here is how in her statement Miss Le Guay d'Oliva* detailed the toilette she wore, when, as she claimed, she was made to look like Marie-Antoinette, at the beginning of August 1784, around the time of the famous affair of the Necklace:

"The lady de La Motte, the pretended countess of Valois, busied herself with my toilette; it was she herself who wanted to dress me; it was she herself who dressed me.  I was put in a white gown of spotted linen.  It was, as far as I an remember, a robe à l'enfant, or a Gaule, a type of dress that is designated most often by the name of chemise, and it was wanted that I be coiffed in a demi-cap."

* The prostitute who was paid by the de la Mottes to pretend to be the queen in the gardens of Versailles in order to continue the deception of Cardinal Rohan.  Despite her profession and part in the affair, she was looked on sympathetically by the public and escaped with no punishment.
1780s 18th century chemise gown Galerie des Modes