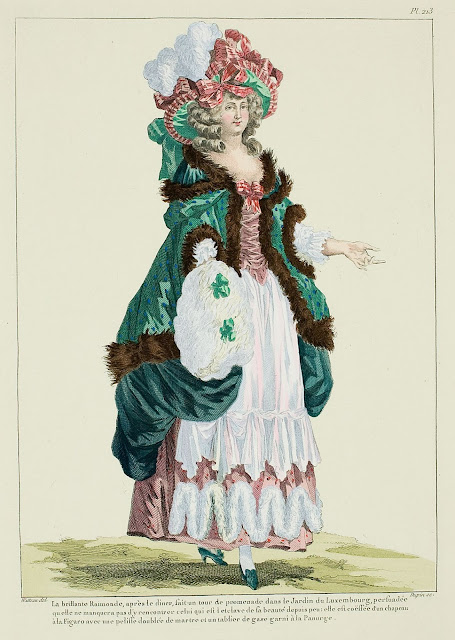 The brilliant Raimonde, after dinner, makes a round of the Jardin du Luxembourg, persuaded that she will not fail to meet the one who is the slave of her beauty before long: she is coiffed with a hat à la Figaro with a pelisse lined with sable and a gauze apron trimmed à la Panurge. (1785) 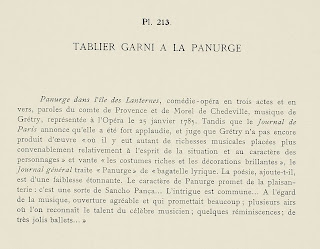 Panurge on the Isle of Lanterns,* an opera-comedy in three acts and in verse, words by the comte de Provence and Morel de Chedeville, music by Grêtry, performed at the Opera on January 25, 1785.  While the Journal de Paris announces that it was strongly applauded, and judges that Grêtry had not yet produced a work "where there was as much musical richness set more properly relative to the spirit of the situation and to the personalities of the characters" and extols "the rich costumes and brilliant decorations", the Journal general calls "Panurge" a "lyrical bagatelle.  The poetry," it adds, "is of a stunning weakness.  The character of Panurge promises pleasantry: it is a sort of Sancho Panza ... The plot is common ... With regard to the music, the overture is agreeable and promises much; there are several airs where one recognizes the talent of the celebrated musician; some reminiscences; very pretty ballets ..."

* The story of Panurge and the Isle of the Lanterns was originally from the fifth book of Rabelais's History of Gargantua and Pantagruel, and is described in an issue of the Pennsylvania Museum's Bulletin.