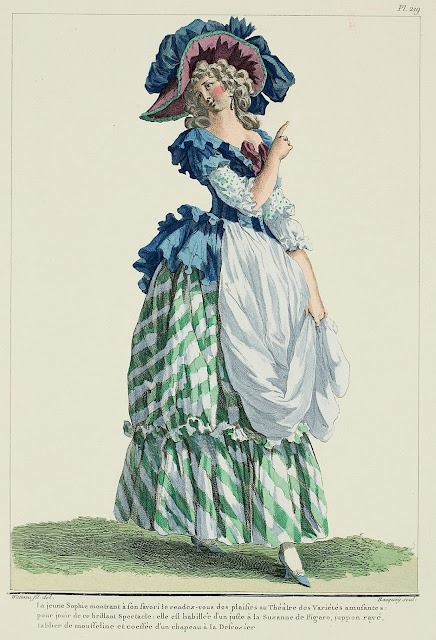 The young Sophie showing to her favorite the rendez-vous of the pleasures at the Théâtre des Variétés amusants: to enjoy this brilliant Spectacle: she is dressed in a juste à la Suzanne from Figaro, striped petticoat, muslin apron and coiffed with a hat à la Defrozier. (1785) 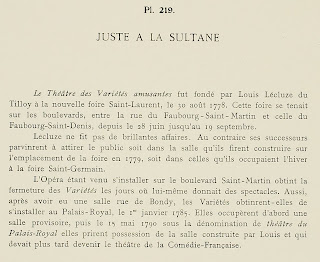 The Théâtre des Variétés amusants was founded by Louis Lecluze du Tilloy at the new St Laurent fair, August 30, 1778.  This fair was held on the boulevards, between the rue du Fauberg-Saint-Martin and that of Faubourg-Saint-Denis, from June 28 to September 19.

Lecluze did not make brilliant business.  To the contrary, his successors managed to attract the public, whether in the hall that they constructed on the site of the fair in 1779, or in those that they occupied in the winter at the Saint-Germain fair.

The Opera being installed on the boulevard Saint-Martin caused the closing of the Variétés on the days when they themselves put on shows.  Also, after having had a hall in the rue de Bondy, the Variétés were installed  at the Palais Royal on January 1, 1785.  They occupied first a provisional hall, then on May 15, 1790, under the name of theater of the Palais Royal they took possession of the hall constructed by Louis and which would later become the theater of the Comédie-Française.