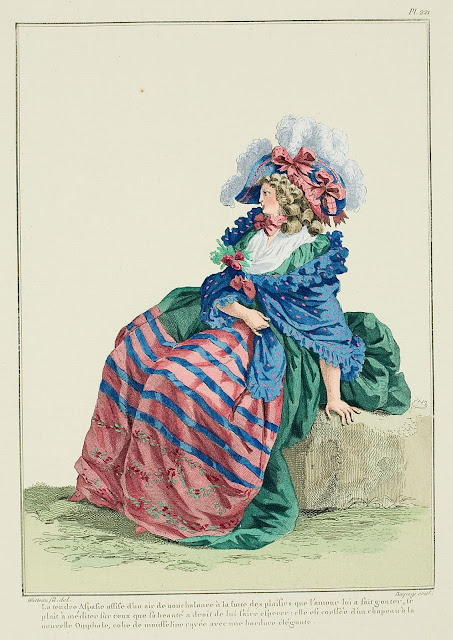 The tender Aspasie* sits with an air of nonchalance following the pleasures that love made her taste, liked to meditate on those that her beauty has right to make her hope: she is coiffed with a hat à la nouvelle Omphale, gown of striped muslin with an elegant border. (1785) 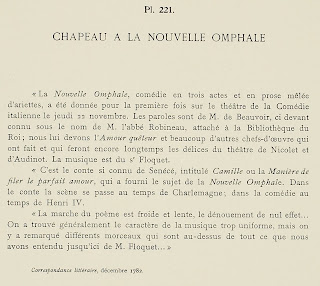 "The New Omphale, a comedy in three acts and in prose mixed with short arias, has been given for the first time at the theater of the Comédie italienne on Thursday, November 22.  The words are by M. de Beauvoir, previously known under the name of M. l'abbé Robineau, attached to the King's Library; we owe him for The Love Seeker and many other masterpieces which were and which will be performed for a long time by the delights of the theater of Nicolet and d'Audinot.**  The music is by Signor Floquet.

"It is the story so well-known from Seneca, titled Camille or the Manner of Escaping the Perfect Love, which has furnished the subject of the New Omphale.  In the story the scene is set in the time of Charlemagne; in the comedy, in the time of Henri IV.

"The motion of the poem is cool and slow, the ending of no effect ... The character of the music has generally been found to be very uniform, but different parts have been noted which are over everything that we have heard up to now by M. Floquet ..."

* A very appropriate name, as Aspasia was known as "the new Omphale".  The original Omphale was a character from the story of Heracles.
* See 46th book, 3rd print: these are famous actors of the time.