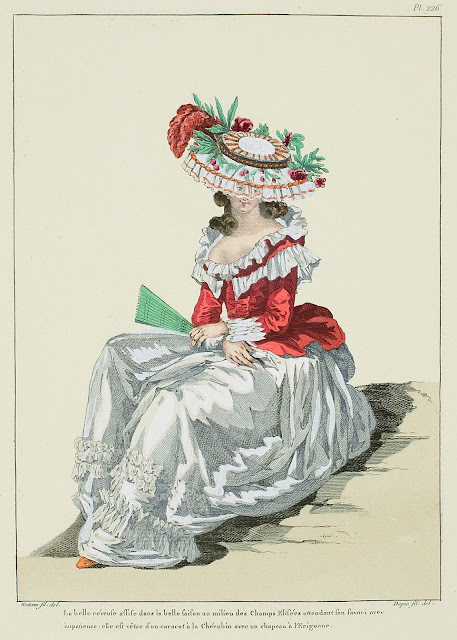 The beautiful dreamer sitting in the summer in the middle of the Champs Elysées, waiting on her favorite with impatience: she is dressed in a caraco à la Chérubin with a hat à l'Erigonne.* (1786) 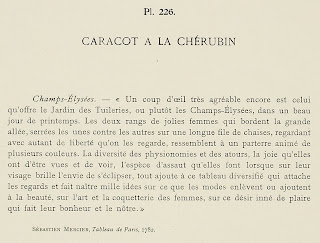 Champs Elysées. - "A very agreeable glance is still that which offers the Jardin des Tuileries, or rather the Champs Elysées, on a good day in the spring.  The two rows of pretty women which border the grand path, crushed against each other on a long train of chaises, watching with much liberty those who watch them, resemble an animated parterre of several colors.  The diversity of the physiognomies and finery, the joy that they have on being seen and seeing, the type of assault that they make when on their faces shines the desire to eclipse each other, all add to this diverse tableau which bind the looks and give birth to a thousand ideas on what fashion removes from or adds to beauty, on the art and coquetry of women, on this innate desire to please those who make their good humor and ours."

* There are two Erigones in Greek mythology: one hanged herself after her father's murder and became the constellation Virgo; the other was Orestes' half-siser and the mother of his child.