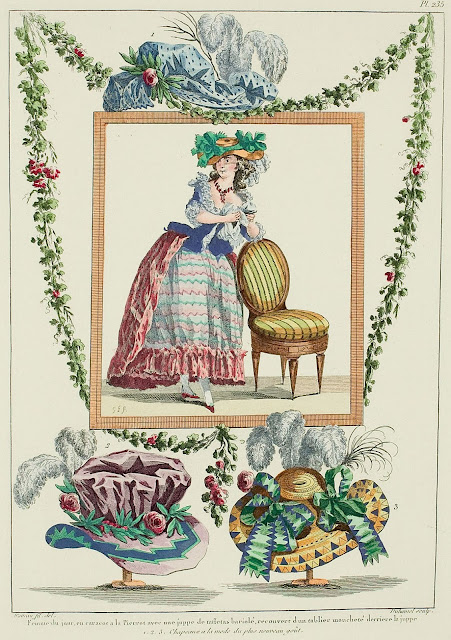 Servant woman, in a caraco à la Pierrot with a petticoat of particolored taffeta, covered by a spotted apron behind the petticoat.
1, 2, 3. Fashionable hats in the newest taste. (1786) 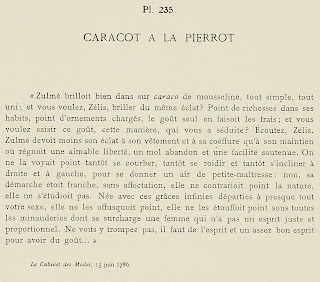 "Zulmé shined well in a muslin caraco, all simple, all plain; and do you want, Zélis, to shine with the same brilliance?  No richness in her dress, no laden ornaments, taste only made them fresh; and do you want to seize this taste, this manner, which has seduced you?  Listen, Zélis.  Zulmé owes less of her brilliance to her dress and her coiffure than to her bearing where an amiable liberty reigns, a soft surrender and a sustained ease.  One never saw her sometimes bend, sometimes stiffen and sometimes lean to the right or left, to give herself an air of the petite-maîtresse: no, her gait is forthright, without affectation, she never spites nature, she is never studied.  Born with these infinite graces shared by nearly all of your sex, she never offends them, she never smothers them under all the affectations that a woman who doesn't have a just and proportional mind overburdens herself with.  Make no mistake, it takes a mind and a rather good one to have taste ..."