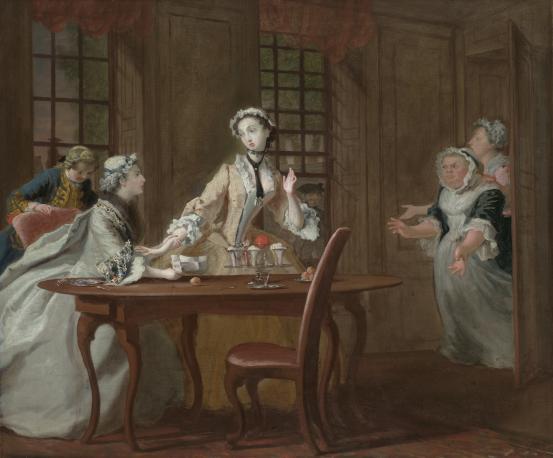 One would think that Pamela's troubles would be over after her marriage: after all, most of her problems stemmed from her "courtship". However, Mr. B's family is still a hurdle to get over. His sister, Lady Davers, does not approve of Pamela's entry into their ranks and is convinced that Mr. B has only pretended to marry Pamela in order to get her into bed, anyway.

In the pictured scene, Mr. B has been away with a sick friend for some time, and has asked Pamela to meet him that afternoon at a different friend's house. Unfortunately, Lady Davers arrives with her nephew, "Jackey", and maid, Becks, and pins her up in a parlor. Every time Pamela tries to leave, one of them puts a chair in front of the door and sits in it. (This happens half a dozen times.) Pamela pleads that she has a "pre-engagement" and shows Lady Davers Mr. B's letter asking for her, but Lady Davers accuses her of putting on airs and repeatedly calls her a creature and a wench. At last, Pamela calls to the coachman out the window to have the carriage made ready, and jumps out the window herself to run into it. 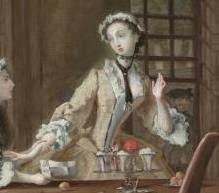 Pamela, now a respectable wife, is dressed in a beige silk gown with an unadorned white stomacher. She has a tucker sewn into the neckline, and ruffles on her shift sleeves, as usual, and she has returned to her smaller cap. The main additions to her wardrobe are jewelry: she now has a small black (lace?) choker with perhaps a tiny pendant, and a much thicker black silk necklace with a larger pendant on the end. 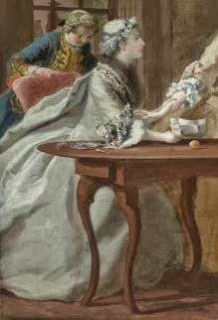 Lady Davers, restraining Pamela with a nasty look on her face, is dressed in a more markedly wealthy way. For one thing, she is wearing a sacque, which at that time was just coming into fashion in England. The sacque's cuffs and robings are made out of a heavily brocaded fabric that looks like it might even use metallic threads. Her cap is very much like Pamela's, as are her ruffles and tucker, but her hair is powdered and she appears to have a fur tippet wrapped around her neck.

Jackey almost looks like a child behind her, but I believe he is meant to be a bit older than Pamela (who is 16). There is something about the pairing of blue fabric for his coat and gold braid for trim that makes him almost appear to be in livery. His hair also seems to be lightly powdered. 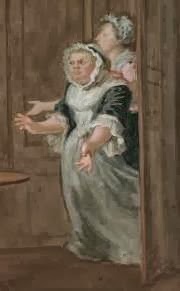 Mrs. Jewkes has been somewhat redeemed in the text at this point, and treats Pamela with the respect she deserves. When Lady Davers asks for a table and chairs to be brought in so she and Jackey can eat, Mrs. Jewkes makes sure a third chair is added for Pamela (although Lady Davers refuses to allow her to be seated, due to her determination that Pamela is her brother's mistress). Perhaps relating to her change of moral position, Mrs. Jewkes is also dressed more respectably, in a black gown with a kerchief covering the stomacher, and a long white apron. Her cap was previously usually worn with the "ears" pinned up, but now they are tied firmly under her chin.

Becks cannot be seen well behind Mrs. Jewkes. Fitting to her position as a lady's maid rather than a housekeeper, she is wearing a pink silk gown and a cap with no ears.

And just visible behind Pamela's arm is Jonathan, the coachman, in a black cocked hat.