December 13, 2013
This is the first 18th century gown I've made since taking those many patterns for my book, and I think it's a great improvement over the blue linen one I made a few years ago. (The stays underneath are much better as well.)

I based this gown on the one pictured below, an anglaise with back pleats, a closed front, rounded skirt edges, and loops inside to pull it up (which I haven't put in yet but plan to eventually). It's also based in part on all the quotes about muslin gowns and silk coats, although this coat is linen.

The original has a matching petticoat, but the one I wore to the Battle of Saratoga re-enactment is old, from the Old Stone Fort fiasco/ensemble. I really need to repleat it and replace the waistband, but somehow that never seems very important until I put it on and realize it's too big.

- When scaling up an 18th century pattern, don't widen all the pieces in equal proportion. The back pieces barely need to be enlarged. Just because the dress form's shoulders are enormous doesn't mean that I need the straps to be out that far. (But once I fiddled a bit, I ended up with one strap in the exact right place and the other only out a bit too far, which is a huge improvement on my previous efforts - it's hard for me to get rid of preconceptions about where shoulder seams are supposed to go.)


- Allotting enough fabric for the pleats is very important, otherwise you end up with these tiny, tiny little pleats. 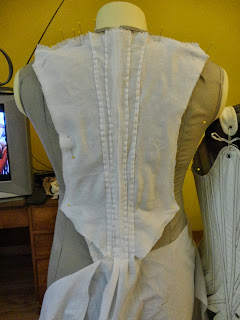 - I always have this weird thing about setting in 18th century sleeves, where I want them to be really pleated at the top. This is silly and I know it's silly because I've taken enough patterns to know that you don't need that! After taking out the pleats, I put it back on and tugged the sleeves up to fit more snugly. I could have actually cut them a little bit smaller.

Anyway, there are all sorts of little problems (the waist was WAY too low at first, and I raised it wherever I could, but there's only so much you can do with this style of back), but I'm very happy with how this turned out. Can't wait until next summer's 18th century events with the ladies to take it out again!