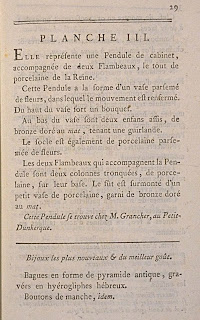 This Clock has the shape of a vase dotted with flowers, in which movement is contained. From the top of the vase blooms a bouquet.

At the bottom of the vase are two seated children, of matte ormolu, holding a garland.

The pedestal is also of porcelain dotted with flowers.

The two Candlesticks which accompany the Clock are two truncated columns, of porcelain, on their base. The barrel is surmounted by a little porcelain vase, trimmed with matte ormolu.

This Clock is found at the shop of M. Grancher, at the Little Dunkirk.**
---
The newest and most tasteful jewels.

Rings in the form of ancient pyramids, engraved with Hebrew hieroglyphs. 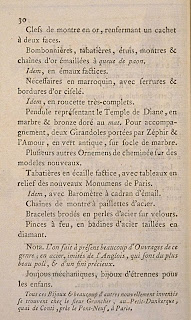 Kit in Spanish leather, with fittings and edgings of chased gold.

Clock representing the Temple of Diana, in marble and matte ormolu. For an accompaniment, two Girandoles carried by Zephyr and Love, in antique green, on the marble base.

Several other Chimney ornaments in the new models.

Tobacco boxes in false tortoiseshell, with relief pictures of the new Monuments of Paris.

Idem, with a Barometer with an enamel dial.


Note. At present many Works of this type are made, in steel, imitating the English, who make the most beautiful polish, and a precious finish. 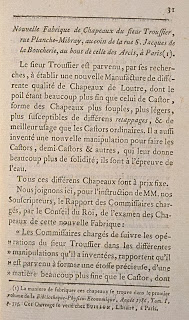 
All these Jewels and many others newly invented are found at the shop of M. Grancher, at the Little Dunkirk, quai de Conti, near the Pont-Neuf, in Paris.

---
New Hat Fabrics from M. Troussier, rue Planche-Mibray, at the corner of the rue St. Jacques of the Boucherie, at the end of that of the Arches, in Paris (1).

(1) The manner of making these hats is found in the first volume of the Physico-Economic Library, Year 1786, Vol. 1, p. 375. This Work is sold at the shop of BUISSON, bookstore, in Paris.

M. Troussier is rising up, through his researches, to establish a new Manufacture of different quality of Otter Hats, whose fur being much more fine than that of the Beaver, in the form of the supplest, lightest Hats, the most susceptible to different reshapings, and of a better practice than the ordinary Beavers. He has also invented a new manipulation to make Beavers, half-Beavers, and others, which give them much more solidity; they are made waterproof.

All the different Hats are of a fixed price. 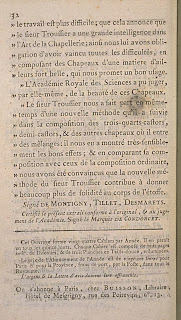 We add here, for the instruction of Messieurs our Subscribers, the Report of the Commissaries charged, by the King's Council, with examining the Hats of this new Fabric:

"The Commissaries charged with following the operations of M. Troussier in the different manipulations that he has invented, report that he has achieved the formation of a precious stuff, of a material much finer than Beaver, the labor of which is more difficult; it is announced that M. Troussier has a great intelligence in the Art of Hatmaking; thus we have the obligation to his having defeated all difficulties, in composing Hats of a very beautiful material, which promises to us a good usage.

"The Royal Academy of Science has been able to judge, by itself, the beauty of these Hats.

"M. Troussier has expressed to us at the same time a new method which he has follwed in the composition of the three-quarter-beavers, half-beavers, and the other hats where mixed are used: he has very-sensibly shown us the good effects; and in comparing his composition with those of the ordinary composition, we have been convinced that the new method of M. Troussier contributes to giving much more solidity to the body of the stuff."

Certified that the present extract conforms to the original, and to the judgement of the Academy. Signed the Marquis DE CONDORCET.

* The Rue Thiroux porcelain factory in Paris was under Marie Antoinette's protection, and the products were known as "Queen's porcelain". Other Parisian factories had other royal patrons. (source)

** The sign for M. Grancher's shop (at 3, Quai de Conti) was a metal ship known as the Little Dunkirk.