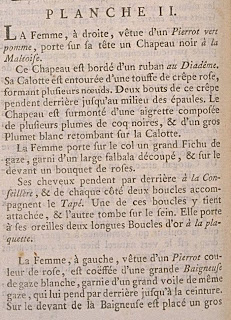 THE woman, on the right, dressed in an apple green Pierrot, wears on her head a black Hat à la Maltoise.

This Hat is edged with a ribbon au Diadême.* Its Crown is enveloped with a tuft of pink crêpe, forming several bows. Two ends of this crêpe hang behind to the middle of the shoulders. The Hat is surmounted with an aigrette composed of several black rooster feathers, and a large white Plume falling back on the Crown.

The Woman wears on her neck a large Kerchief of gauze, trimmed with a wide, pinked flounce, and on the front a bouquet of roses.

Her hair hangs in the back à la Conseillère, and on each side two curls accompany the Tapé. One of these curls is held up, and the other falls to the chest. She wears in her earls two long gold Hoops à la placquette.**

The Woman, on the left, dressed in a rose-colored Pierrot, is coiffed with a large Baigneuse of white gauze, trimmed with a  large veil of the same gauze, which hangs behind her to the waist. On the front of the Baigneuse is placed a large bow of nakara ribbon au Diadême, whose two ends fall on each side of the shoulders.

She wears on her neck a large Handkerchief of plain gauze, and, in her ears, also two long gold Hoops à la placquette.

Her hair in the back is pulled up in a flat Chignon, and on each side a large Curl falls on her chest.

* With a black zig-zagged border, similar to à la Harpie.
** Made up of flat pieces.