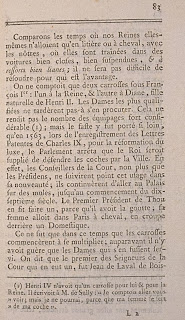 Let us compare the times when our Queens themselves went out only in a litter or on horseback, with ours, when they are drawn about in well-enclosed and well-suspended carriages, and with well-bound springs; it will not be difficult to figure out which has the advantage.

Only two coaches were counted under François I: one for the Queen, and the other for Diane, the natural daughter of Henri II. The most qualified Ladies were not long in procuring them. That did not make the number of equipages very considerable (1); but the pomp there was carried so far, that in 1563, at the time of the registering of Charles IX's Letters Patent, for the reformation of luxury, Parliament stopped that the King would be begged to defend coaches through the City. In effect, the Counselors of the Court, no more than the Presidents, never followed this practice in its novelty; they continued to go to the Palace on mules, until the beginning of the seventeenth century. The First President de Thou* had one made, because he had gout; his wife went to Paris on horseback, riding pillion behind a Servant.

(1) Henri IV only had one coach for himself and for the Queen. He wrote to M. de Sully: "I counted on going to see you; but I could not, because my wife went out in my coach". 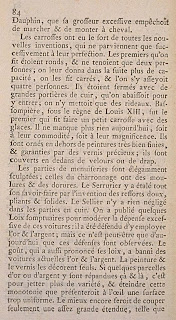 It was only in these times that carriages began to multiply; previously there were hardly any Ladies who used them. It is said that the first of the Lords of the Court who had one, was Jean de Laval de Bois-Dauphin, whose excessive girth prevented him from walking and mounting a horse.

Carriages had the fate of all new inventions, which only rise successively to their perfection. The first ones made were round, and only held two people; they were given later a greater capacity, they were made square, and they sat four people. They were closed with large leather doors, that were lowered for entry; only curtains were used. Bassompière, in the reign of Louis XIII, was the first who had made a little carriage with windows. Nothing is lacking today, whether in comfort or magnificence. They are decorated on the outside with very-well finished paintings, and protected by precious varnish; they are covered within with velvet or wool. 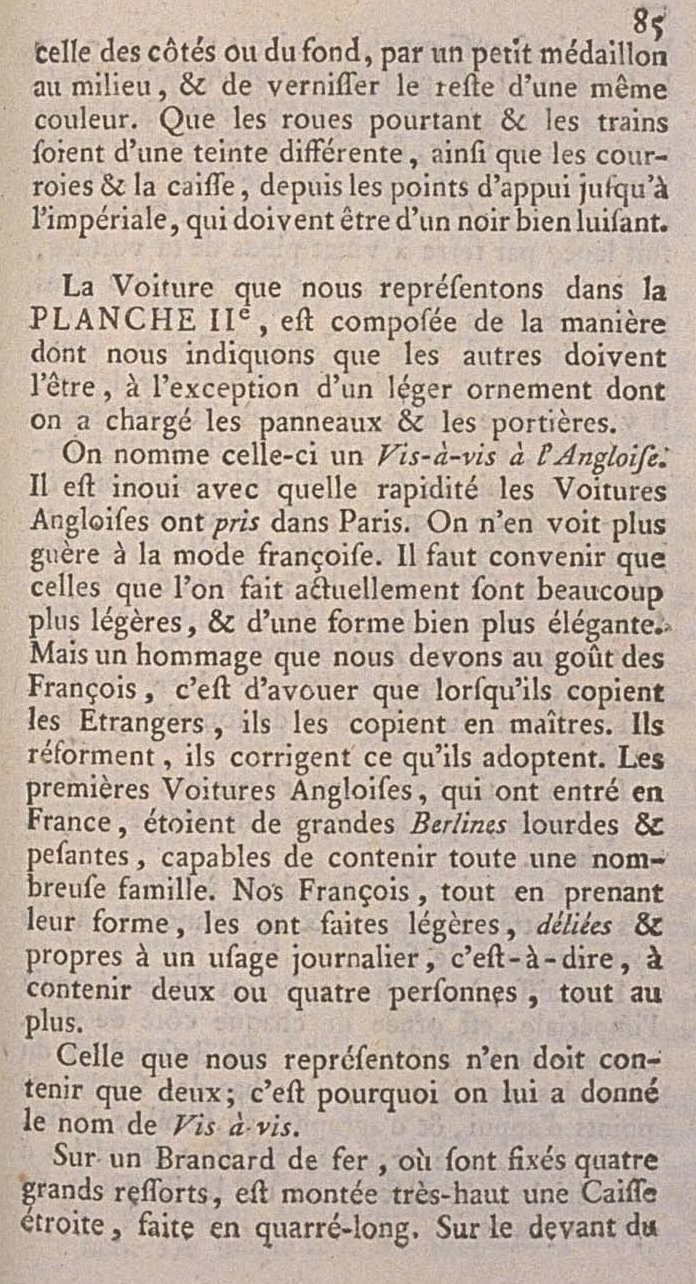 The woodworked parts are elegantly sculpted; the wheels are of molding and gilding. The Locksmith has displayed all his knowledge in the invention of gentle, pliant, and solid springs. The Saddler has neglected nothing in the leather parts. Some Sumptuary Laws have been passed to moderate the excessive expenditure on these coaches: it has been forbidden to use gold and silver; but it may be only today that these prohibitions are observed. Taste, which has also formed the laws, has banished the actual gold and silver coaches. Painting and varnish only decorate them. If some particles of gold or silver are used here or there, it is to throw in more variety, and extinguish this monotony that presented to the eye a too-uniform surface. The best would still be cut only in a rather large expanse, such as that of the sides or bottom, by a little medallion in the middle, and would be varnished over the rest with the same color. However, as the wheels and undercarriage are of a different color, together with the straps and the box, from the support points to the dome, which must be a very glossy black.

The Coach that we represent in the SECOND PLATE, is composed in the manner that we indicate that others must be, with the exception of a light ornament that is charged on the paneling and the doors.

This type is called a Vis-à-vis à l'Anglaise. It is incredible how quickly English Coaches are taken in Paris. They are hardly ever seen anymore in the French style. It must be admitted that those actually made are much lighter, and of a much more elegant form. But an homage that we must give to the French taste, is to confess that when they copy Foreigners, they copy the masters. They reform, they correct what they adopt. The first English Coaches, which were brought into France, were the great, slow, and heavy Berlines, capable of holding all of a numerous family. We French, while taking their form, have made them light, agile, and fit for daily usage, that is to say, to hold two or four people, at most.

That which we represented can only hold two; that is why it was given the name Vis-à-vis. 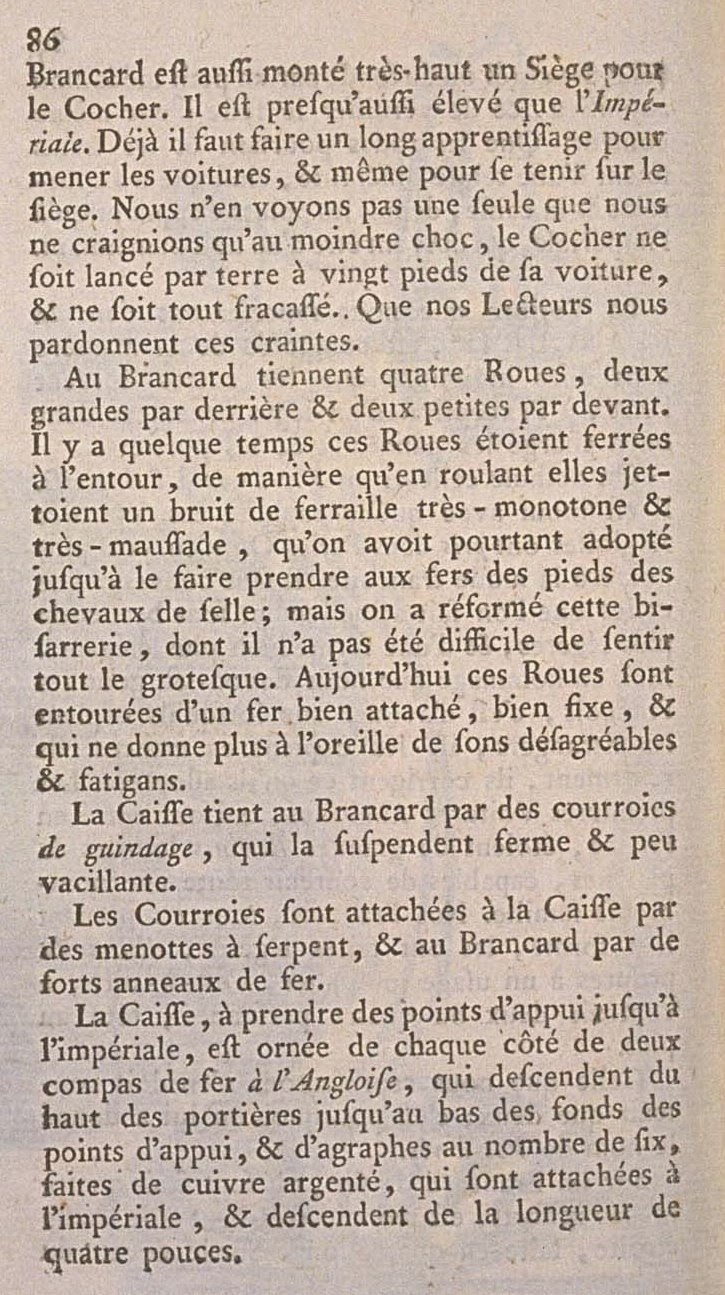 On an iron Shaft, where are fixed four large springs, a narrow Box is mounted very high, made in a long-square. On the front of the Shaft a Seat for the Coachman is also mounted very high. It is almost as high as the dome. Already it is necessary to make a long apprenticeship to drive coaches, and even to keep on the seat. We do not see a single one in which we feared that at only the slightest shock, the Coachman be thrown to the ground twenty feet from the coach, and be smashed. Our Readers may pardon us for these fears.

Four Wheels hold the Shaft, two large ones in the back and two little ones in front. Sometimes these Wheels are covered with iron all around, in such a manner that in rolling they threw a very monotonous and very fretful rattle, yet they were adopted to give them shoes like those of saddle horses; but this queerness, whose grotesqueness it is not difficult to feel, was reformed. Today these Wheels are covered with a well attached, well fixed iron which no longer gives disagreeable and fatiguing sounds to the ear.

The Box is held to the Shaft by winching straps, which suspend it securely and with little wavering.

The Straps are attached to the Box with curled hooks, and to the Shaft with strong iron rings. 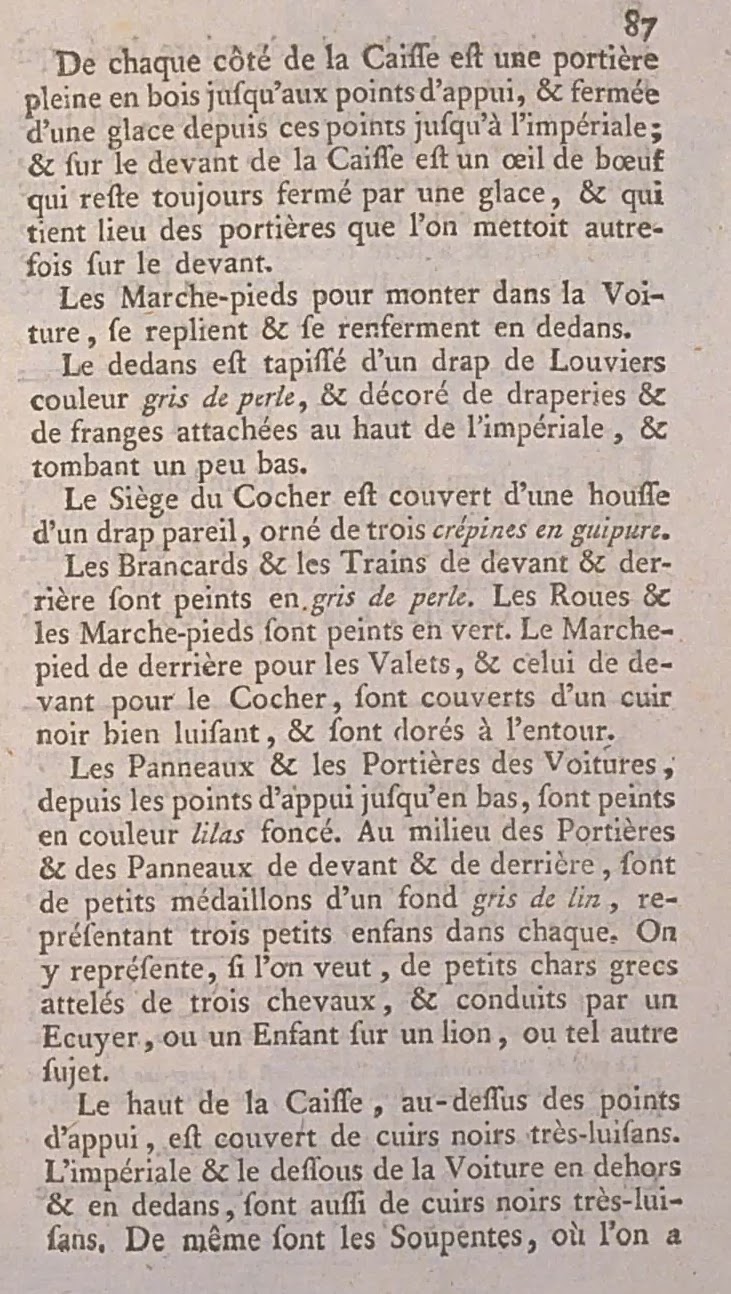 The Footboard for getting into the Coach, is folded and kept inside.

The inside is upholstered in a pearl grey Louviers cloth, and decorated with draperies and fringes attached to the top of the dome, and falling a little below.

The Coachman's Seat is covered with a slipcover of a matching cloth, trimmed with three guipure crépines.*

The Shafts and Undercarriages of the front and back are painted pearl grey. The Wheels and Footboards are painted green. The back Footboard for Valets, and that in front for the Coachman, are covered with a very glossy black leather, and are gilded around.

The Paneling and Coach Doors, from the support points to the bottom, are painted in dark lilac. In the middle of the Doors and Paneling in the front and back, are little medallions with an unbleached linen colored ground, representing three little children in each. One represents there, if one wants, little Greek chariots harnessed to three horses, and driven by a Horseman, or a Child on a lion, or some other subject.

The Coach that we have drawn, is taken from the Workshop of M. Hervé, Master Saddler, Harness-maker, and Carriage-maker, residing in Paris, rue Feydeau, at the corner of the rue de Richelieu. He makes, sells, loans, and buys all sorts of fashionable Coaches. He delivers to the Provinces and in all foreign Kingdoms.